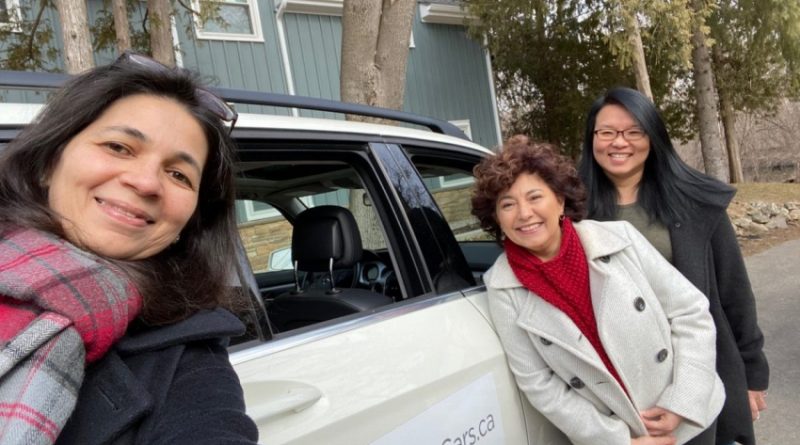 The colour pink played a big role recently in earning a 10-year Ontario Volunteer Service Award for the organizers of a Markham-based non-profit, The Giving Tree Unionville.

That’s because one of its projects, Pink Cars Canada, has so far succeeded in arranging times for – and driving seniors to – 9,800 vaccination appointments since March 1, 2021.

“The kindness and joy and gratitude shown by everyone involved have made this one of the most rewarding and moving programs I’ve ever been a part of,” explains Shanta Sundarason, founder of The Giving Tree Unionville. “So many people stepped up.”

Over the past decade, The Giving Tree Unionville has launched several initiatives aimed at enlisting the community, especially young people, to address social issues. Its mission is “to instill confidence and determination in our youth to become positive change-makers of tomorrow.”

Pink Cars grew out of one of those initiatives. Shortly after the pandemic started, to fill a growing lack of PPE – personal protective equipment – Sundarason rallied the families of her youth members to start making needed items.

The word quickly spread, and people began sewing masks. In all, the group sewed and distributed more than 50,000 masks.

Volunteers included a number of seniors who had the time and skills. Yet, as governments prepared to roll out the first vaccines in early 2021, it became apparent that some of those seniors were struggling to book appointments online or even get to the vaccination sites and possibly stand in long lines.

“Just 48 hours before the first vaccines were given, we put out the call for volunteer drivers,” Sundarason notes. “Within a day, we had a website, a safety protocol and a squad of people ready to provide rides.” The “pink” fleet rose to about 50 cars.

Two other key organizers were recognized during the award ceremony, held virtually in late November. Enid Reyes-Martin tackled booking appointments on behalf of those seniors who struggled with the online process – or didn’t have a computer at all. Chean Chen managed the list of drivers and coordinated times and locations for rides.

More help arrived when local McDonald’s franchise owners Todd and Marcia Finlayson offered gas cards and meals for drivers, as well as free coffee and a donut following each appointment if the senior wished it.

Meanwhile, Stouffville Toyota dealership owner Kevin Baxter called “out of the blue” to offer the use of a RAV-4 for one year. Other organizations donated enough funds to cover the costs of running the program.

“Pink epitomizes love and care and empathy,” Sundarason says. “In the early part of the pandemic, none of us knew what was coming. These programs show just how willing people are to do whatever it takes to help each other.”