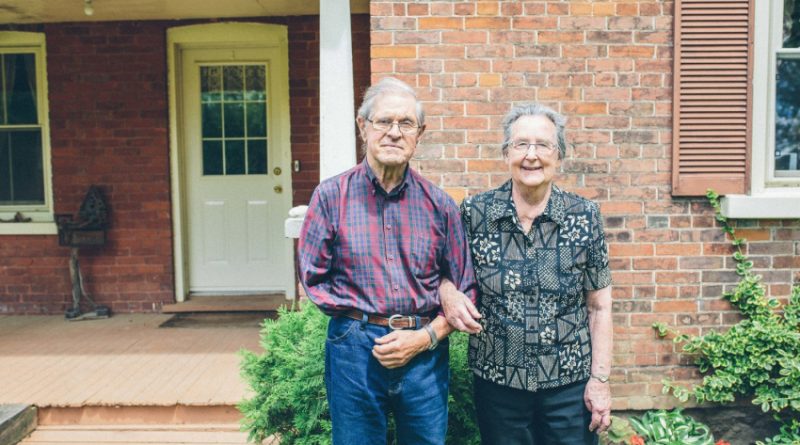 This month, he shares the following parts of a recorded conversation with George Reesor.

You wouldn’t remember the expropriation for the Pickering Airport. Well, our property was involved in that.

We found ourselves renting rather than owning. Many of our rural people moved; quite some distance to Listowel, some north east toward Cannington in that area.

And we made I don’t know how many trips to western Ontario looking for farmland. And then one day Anna said, “Why don’t we look for something around here?” We had a good youth group at Church and our children enjoyed their school.

So we began checking around some local listings and then one day I happened to think of this old couple who lived up here. We knew them, they were family friends.

So I came up to see them one evening and before I was able to broach the topic Ezra said, “You know, we’re getting older and the taxes are getting so high it’s time someone else owns this property.” And I said, “Well, that’s what I came to see you about, and it just went on from there.”

Peter Reesor came up in 1796 to do some scouting.

He purchased some land and traded his horse and saddle for two hundred acres in Whitchurch area and walked back to Pennsylvania.

It was six weeks in a covered wagon and I think you could walk it more quickly than that, but it is a long walk. It’s just the way it was done and I know of two brothers who walked from Pennsylvania, Lancaster Pennsylvania up here to this area and from here to Youngstown, Ohio area.

One tends to feel rooted. The Reesors were among the earliest pioneers of Markham. I believe Toronto, known as York at that time had a population of about 800. And that of course has changed since then.

There were several things they watched for. One was good soil and for that, they watched for Black Walnut trees. And they needed water to power their mills and timber for their buildings.

And when they arrived in Cedar Grove, we’ve been told that the forest consisted of White Pine trees, up to five or six feet in diameter, and 200 hundred feet tall and there was very little undergrowth.

They could just drive right through it.

In retrospect, I see my life as having been made up of a number of what would you call them, a number of stages when, well, there were changes.

Anna and I were married in 1957 and we farmed for about thirty years. But I think of the compartments as seven years, for elementary school. That’s seven years. And then there was another seven-year stretch when I was talked into trying to further my education. And so another seven years for a B.A. degree and then later on another seven years to translate my great grandfather’s (Christian’s) letter collection.

I can’t think of any other project that I was so totally consumed with. It just seemed to be an obsession. You know, you can read history books and in a general way find out what was happening, but letters provide personal experiences.

And there is a historian, from Lancaster, Pennsylvania, when he heard about these letters, the first thing he said was, “those need to be published.”

The earliest letter was written in 1859 and the latest one was dated around December of 1915 just about a week before Christian died. He knew that his health was failing and the letter just sounds like a farewell note, from one friend to another.

My brother and I grew up on the farm down there in Scarborough.

We had about a 20-acre woodlot and we would spend most of the summer down in there in what we called the bush with our Collie dog. Oh, we just spent hours and hours down there.

In later years when we were young adults, there were quite a number of young fellows in the Cedar Grove community and after a hard day’s work in the fields, we’d all gather at the swimming hole to go swimming in the evening. That was another thing.

When I was a schoolboy, summer entertainment would be to dig up some worms and catch some crickets and go fishing down in the lower Rouge. Anything over five inches we’d bring home and clean it, have it for supper.

In the winter time of course when we were quite young, we would go sleigh riding down the hills, skating in the fields. You spend the morning with scoop shovels cleaning the snow off the ice and then in the afternoon, you did your skating. We had lots of fresh air.

The farm directly south of ours belonged to the Diller family and Mrs. Diller was a sister to my mother so their family were first cousins. And they, mother and Aunt Alma were Barkey’s, the next farm southeast.

And then there was that whole crowd. We would have a fall supper for those three groups and we would draw names for our Christmas gift exchange. And then Christmas would be at Grandmother Barkey’s and New Year’s dinner would be at her sister’s, another uncle, the next farm east.

I remember one year they set a cost limit for the Christmas gifts at 25 cents. You weren’t to spend any more than 25 cents.  But that’s back in the days when an ice-cream cone was a nickel. So it’s all relative.