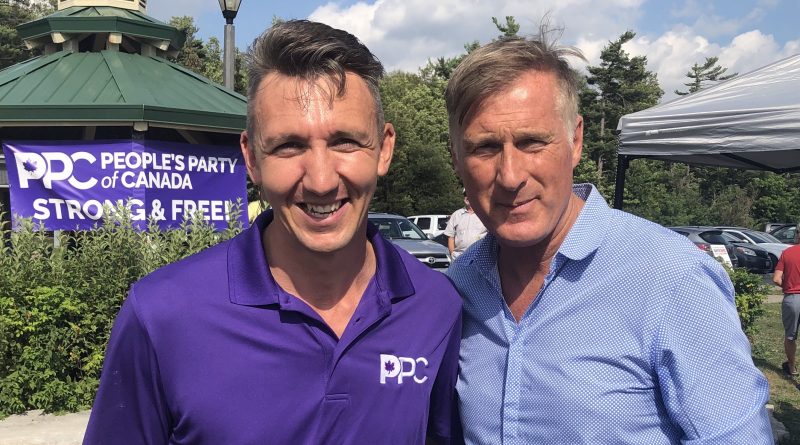 Maxime Bernier, leader of the People’s Party of Canada, visited Thornhill on August 12 to speak at a rally for local PPC candidate Samuel Greenfield. He was introduced by Ontario independent MPP Randy Hillier, leader of the province’s anti-lockdown movement.

“Today, I am angry,” Bernier told the crowd of approximately 150 supporters at Sugar Bush Heritage Park. “I do not recognize my country.”

The audience was enthusiastic and engaged despite the baking heat.

Bernier reiterated several of his key beliefs, including “No pandering, and no identify politics. We believe in politics to benefit all Canadians.

“Just because an idea is popular, does not mean it is just and true,” he stated, quoting Thomas Jefferson: “When tyranny becomes law, rebellion becomes duty.”

Greenfield warned listeners that Canada’s government will take all the power it can with no plan to ever give it back to the people:

“To be frank with you, I have a sick feeling in the pit of my stomach. I am worried for my country, for myself and for my three children.”

He warned against trading freedom for the illusion of security: “Even if you have the best constitution, the best charter and the best system of government, those things will not protect your freedom indefinitely. The preservation of freedom must rest upon a culture of freedom that respects those things. We are guilty of being complacent, and taking these things for granted.”

The People’s Party of Canada opposes what it calls “Public Health Tyranny,” and Greenfield noted that the PPC is neither “pro-vax, or anti-vax. We believe it is a personal decision….we have been told by many ‘my body, my choice;’ where are all those people now?”

Event attendee Felix Shuster, a small business owner who immigrated to Canada from the Soviet Union in 1980 expressed shock and surprise at how quickly Canadians have been willing to accept what he sees as authoritarian rule by their government. “It’s maybe worse in Canada because it has happened so quickly – in the Soviet Union it took decades. Here it has taken two years. Perhaps people who have always lived such a good life, frighten too easily.”

One thought on “Maxime Bernier expresses his anger towards lockdowns”