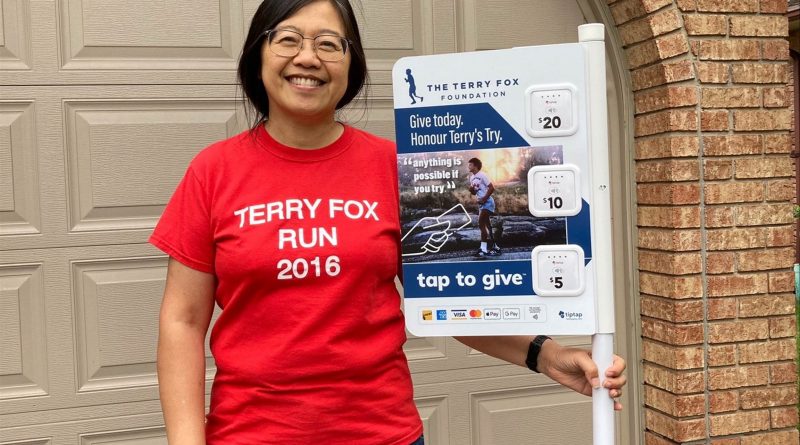 The local event finished as one of the top 25 sites in Ontario for fundraising dollars.

When the final totals were added up, money raised came in at over $65,000. That’s just under the 2019 total, which is quite a feat considering last year’s event was all done online.

This year’s 2021 run is virtual and the Terry Fox Foundation is piloting TipTap Machines for donations and are currently asking businesses if they would be interested in having the machine outside their place of business to support the local Terry Fox Run.

As always, Terry Fox T-Shirts will be sold again this year.

The flowers chosen honour the land where Terry Fox’s ancestors lived: the prairie crocus of Manitoba and the wild prairie rose of North Dakota.

The foundation’s mission – to fund cancer research – is written in English, French and the Métis traditional language of Michif, as is the phrase “Try Like Terry,” in honour of his remarkable effort. The back of the shirt includes a mouse track beadwork border with the Métis infinity symbol.

Registration is now open for the Markham-Unionville sites and people are being encouraged to sign up now for the September 19 event.

Volunteers are needed to help spread the word to get people to register and fundraise.  For questions, contact local run organizer Lilly Ing at [email protected].