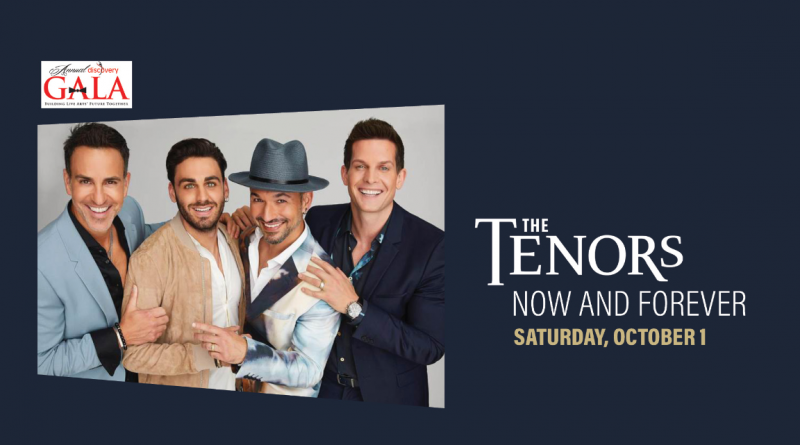 The Flato Markham Theatre’s Annual Discovery Gala returns to the stage for the first time since 2019 on October 1 and will feature Canadian sensations, The Tenors.

Blending classical music and contemporary pop, the Tenors have been thrilling audiences around the world with their powerful songs, outstanding harmonies, and undeniable charm for years. Their inclusion in this year’s Gala is a coup for the Theatre and the Discovery program.

The vocal supergroup has performed for six American presidents, for the world leaders at the G20 Summit, for the opening ceremonies of the XXI Olympic Winter Games, for Her Majesty The Queen’s Diamond Jubilee, The Oprah Winfrey Show, The Primetime Emmy Awards, and the NBC Tree Lighting Ceremony at Rockefeller Centre.

“There is no group out there like them,” says theatre General Manager Eric Lariviere. “Now that they have changed their lineup back to 4 singers…it’s going to be a very special performance.”

Indeed, Fraser Walters left the group this past July. The Tenors have since added Canada’s Mark Masri and Sicily’s Alberto Urso to bring the group back to 4 singers and propel The Tenors into a new era while returning to their roots with that fourth harmony.

Of course, at first glance, an event carrying the moniker “Gala” might not seem like something for the community at large; but the opposite is true. The annual event supports the Theatre’s Discovery program which exists to widen the reach of arts and arts programming to all of Markham and its citizens.

“The Flato Markham Theatre itself exists because of the community and community groups,” says Lariviere. “It’s important that we recognize this and keep supporting this.”