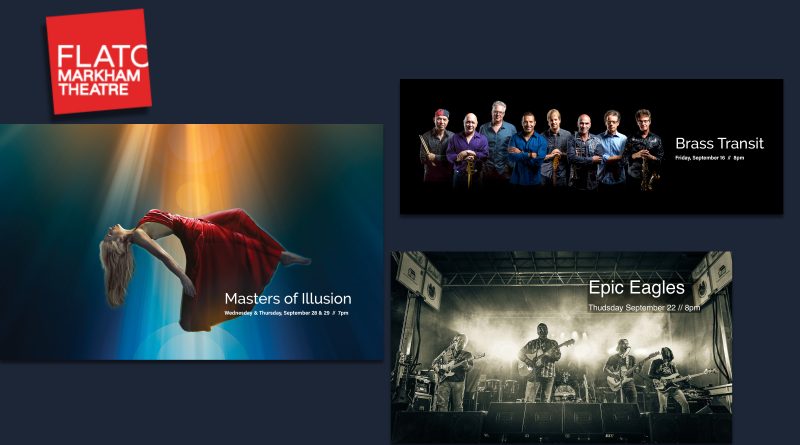 After two long years of isolation, cautious optimism, false starts, and waiting that has ranged from patient to downright screaming, The Flato Markham Theatre comes back full time with a full slate of professional performances this September.

“Our audience is still a bit split,” explains theatre general manager Eric Lariviere. “ Most can’t wait to get back to their seats but some, understandably, are still cautious. We aim to give them great reasons to come out and join us.”

After starting off with a night featuring legendary Canadian performer Tom Cochrane, the music performances keep on coming.

On September 16, the music of supergroup Chicago comes to life with Brass Transit, a tribute so true to the legendary band that its singer has been hired to play with Chicago itself.

“I just took it as a compliment,” laughs the group’s founder John Carlucci. “He really is an incredible singer”.

Show after show, audiences praise the band for its energetic yet accurate performances and spectacular attention to detail. Hits like, Saturday In The Park, 25 or 6 to 4, If You Leave Me Now, Feelin’ Stronger Every Day and Beginnings have generally left crowds standing, begging for more.

The, not-so, secret to Brass Transit’s success are the incredible musicians in the band. A quick glance at their bio reveals them to have been the “first call” sidemen of artists like Chuck Berry, Ben E. King, Aretha Franklin, Del Shannon, Kim Mitchell, Sass Jordan, Corey Hart, Gowan, and dozens more.

Some have gone as far as saying that Brass Transit are a better version of Chicago than the band that tours as Chicago today.

Carlucci pushes back at that right away.

“It never crossed my mind that we were competing with them,” he says. They’re my heroes.”

“They’re the best at what they do,” says Lariviere, referring to Brass Transit. “There’s no one better.”

Following Brass Transit comes the music of another legendary band, this time from California, The Eagles.

Epic Eagles, the country’s leading Eagles tribute, pulls into the theatre on September 22.

They will perform the greatest hits of the Eagles and Don Henley, complete with every lick and the perfect vocal harmonies fans come to expect. Songs like Hotel California, One of These Nights, Life in the Fast Lane, Desperado, Take It Easy, New York Minute, Boys of Summer, and many more will be performed with laid back perfection; just like the real deal.

“The promoter bringing in Epic Eagles is one of the best,” Lariviere says. “They’re known for their excellent and accurate tributes.

Based on the multi-award long-running television show of the same name, the Markham show will feature two-time “Comedy Magician of the Year!”, Chipper Lowell, Dan Sperry who has been described as “David Copperfield meets Marilyn Manson”, and Jonathan Pendragon a performer at three Presidential Galas in Washington D.C., for the Queen of England, the Prince of Wales and the Royal Family of Monaco.

All three performers are cutting-edge illusionists who have been featured on the TV show to be sure; but they’ve also all spent a lifetime to perfect their skills and stagecraft.

“This incredible show has been delayed a few times in the last two years, Lariviere says. “We couldn’t be more excited to finally make this magic happen on our stage.”

If this first month back is any indication, Markham theatre goers have much to look forward to in the near future.