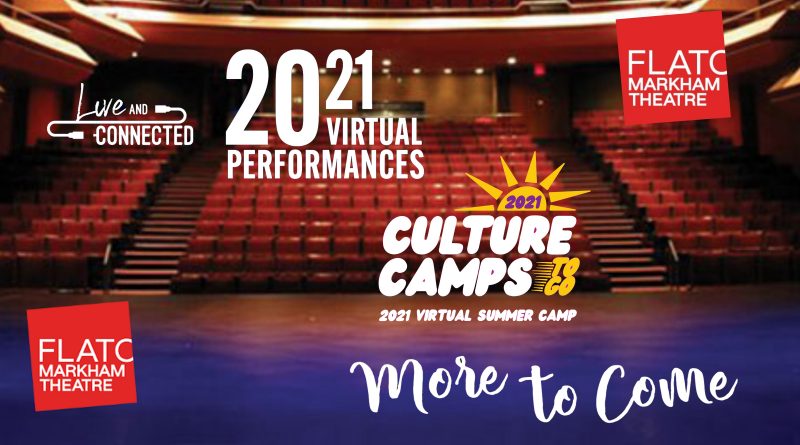 When asked about 2020, theatre managers all over Ontario and the world have their own version of this exact same thought. The pandemic has taken its toll on everyone and every industry, but none so thoroughly and completely as the live performance industry.

“It happened very fast. Then all hell broke loose and we just shut down,” Flato Markham Theatre GM Eric Lariviere said. “Ultimately, we just didn’t want people in the community to forget or forget that we’re there for them.”

The good news now, of course, is that it looks like it may finally be time to open up stages again. With Ontario ‘s Stage 2 of opening getting so much closer, and which includes outdoor performances, having audiences safely inside theatres again seems to be a certainty by the late fall or early in the new year.

The Flato Markham Theatre is no exception.

“I’m very confident that by 2022, we’ll be able to start up,” says Lariviere. “This includes bookings and shows postponed from 2020, but also local rentals and digital streaming services as well. We’re trying to be as nimble as possible.”

When pressed on how quickly he’ll be able to book professional shows once open, Lariviere doesn’t mince words.

“We have more than enough shows, postponed from 2020, already booked for 2022. Everyone is excited to go back to the stage. I can guarantee you that.”

Theatre patrons and fans of good music don’t have to wait until the fall, however. The Flato Markham Theatre has just announced its first ever virtual performance season, Live & Connected, which will kick-off a virtual long-awaited return to the beloved performing arts venue.

Designed to remind audiences of the great programming they had to do without this past year, Live and Connected will include virtual performances by national and international acclaimed performers and talent exclusively delivered by the Flato Markham Theatre team to the homes of audiences in Markham and beyond.

The season will include many different series, including a community focused series, live interviews with Canadian artists, and more!

“We were very lucky to have the rights to present this for Canada,” Lariviere said. “It was originally produced for public television in the U.S., but it aligned so well with what we do that we wanted to present it to our audience.”

This success has led the theatre to make investments into producing its own streaming performances. Lariviere has no less than three national artists in negotiation to be broadcast from the Markham stage all over the world.

“We sold tickets for the first as far as Germany,” Lariviere said.

Of course, the most special thing about The Flato Markham Theatre is its place in the community. For nearly four decades, support for the creative lives of Markham artists has been a cornerstone for the theatre. This year, as unique as it has been, has been no different.

“We’re going to showcase some of the work done by Markham Arts Council by using the theatre’s reach to amplify the voices of our artists,” Lariviere said. “Same thing with the Jazz Festival and The Markham Music Festival. We’re trying to support the community.”

For many young theatre fans, summer isn’t complete without the performance focused camps and courses offered at The Flato Markham Theatre. This summer will be no exception.

After the successes of last year’s first ever online camps, it seemed impossible not to bring them back for this year as well.

“Our instructors, who are seasoned professionals from the industry, are back to provide the program,” Lariviere said. “In a two week program, the kids learn how to create a whole show online. It’s a great opportunity.”

For more information about any and all of the goings on at the Flato Markham Theatre, visit Flatomarkhamtheatre.ca.