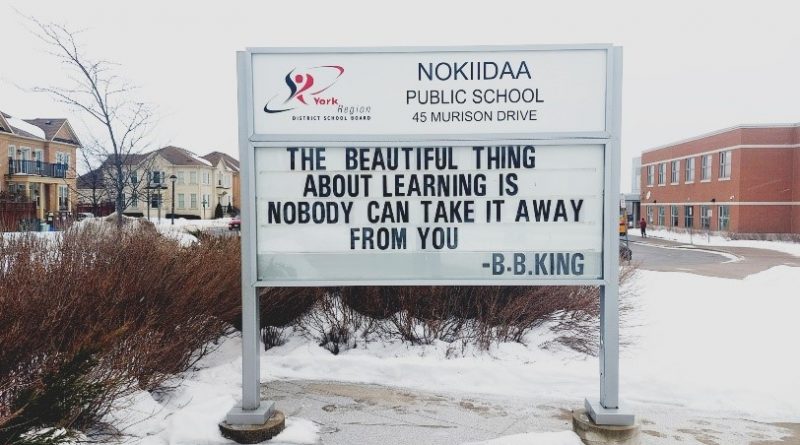 The former Sir John A. Macdonald Public School in Markham has been renamed Nokiidaa P.S., an Ojibwe word that means “let’s all work on this together.”

“Renaming schools is a sensitive process and cannot be done in isolation of the name that has been removed,” says York Region District School Board Indigenous Trustee Lauri Hoeg.

“The name should have Indigenous significance. We all need to recognize that Indigenous languages are part of our original fabric and of the land we all share as Canadians. It is imperative that healing is also part of the process and for healing to happen, medicine must be put on the wound.”

Macdonald was Canada’s first prime minister. York Region District School Board trustees voted to rename the school after acknowledging his connection to residential schools and the forced removal of Indigenous Peoples from their land. He also denied citizenship to Chinese immigrants and supported legislation that prohibited them from voting until 1946.

“Renaming a school is an important responsibility, and I am grateful to all who shared their feedback and participated in the consultation,” says Markham Wards 2, 3 and 6 Trustee Ron Lynn. “We speak of our commitment to Truth and Reconciliation, but our legacy will not be measured by the words that we speak if they are not aligned with our actions. In renaming this school Nokiidaa P.S., we are aligning our words and our actions.”

Learn more about the meaning of Nokiidaa and its pronunciation (no-key-dawe) in this video. Earlier this year, the Durham District School Board changed the name of Sir John A. Macdonald P.S. in Pickering to Biidassige Mandamin P.S. in honour of an Anishinaabe elder known for her advocacy work on water protection. That board also plans to rename Julie Payette P.S. in Whitby after community members raised concerns about the former governor general’s decision to resign amid bullying allegations.

Photo: The former Sir John A. Macdonald Public School in Markham has been renamed Nokiidaa P.S.