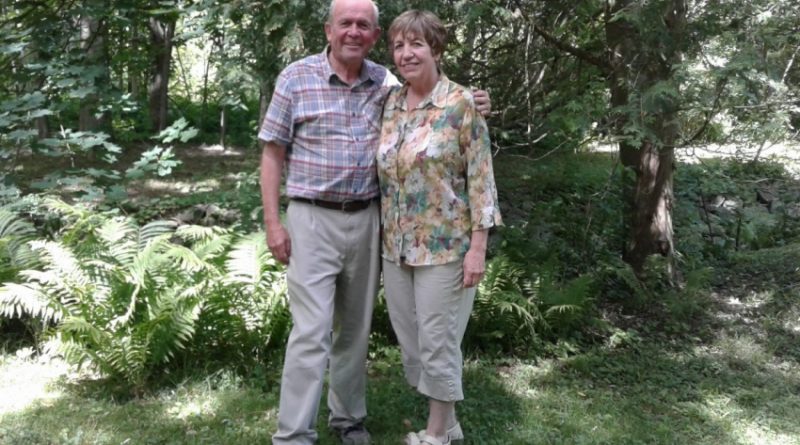 Below, he shares the following parts of a recorded conversation with Gunter and Beth Langhorst. They recount their days growing up in Markham.

Beth: Our family moved to 16th Avenue from Toronto in ‘54. My dad bought a two-acre plot of land and had approval to build a two-storey, four-bedroom brick house. Hurricane Hazel came along in the fall and flooded the garage footings. There were no sewers or water mains then, so Dad had to put in a septic tank, and a dug well.

Gunter: The Groves lived on both sides of 16th Avenue East. On the north side was the farm of Roy Grove and his wife, Mary. Their two-storey brick farmhouse and barn were still standing until about 10 years ago. Frank Grove and his wife Piney farmed on the south side and raised cows, horses, pigs and chickens. They sold their 100 acres in the early ’80s to developers.

Beth: Through public school, my best friend was Judy Grove, who lived on the farm next door. The Grove Family had two or three horses, and we rode them every day, sometimes re-enacting episodes from “The Lone Ranger.” sometimes taking Kool-Aid to Judy’s brothers in the back fields or herding cows to the barn at milking time.

Gunter: Nobody had home freezers. Some people only had iceboxes in the early 50s. Markham didn’t have regular 60-cycle power until the late ’40s and early ’50s. And it was then that people started to buy radios and electric refrigerators. There were still people delivering blocks of ice for home iceboxes in the 50s. Many of these blocks were carved out of Lake Simcoe’s winter ice.

Beth: My family bought our weekly groceries locally. For meat, we went to Leadbetters and if Mom bought more than our family needed that week, she could leave it frozen in her own locker at Leadbetter (Meats). We bought our groceries at the local IGA store owned by the Didier family. There were a lot of home deliveries in rural areas back then. Bread and pastries were pre-ordered by our mom and delivered by Stouffville Bakery. The milkman from Markham Dairy came to our house three times a week. We ordered detergents and brushes right at home from the Fuller Brush man.

Gunter: We first lived on Helen Ave. in Unionville, which is where my uncle lived and that’s where we experienced Hurricane Hazel in October ‘54. I started classes as a 9-year-old at Hagerman School on 14th Avenue. I had Miss Charleton as a teacher. I had just graduated from grade 3 in Germany around Easter time and re-entered grade 3 here. That gave me the opportunity to learn English. I didn’t speak a word of English when I came, but then Miss Charleton always put me in the corner with a few kids who had their homework or assignments finished. We would go through the Eaton’s catalogue or maybe Life magazines to learn words like house, clothes, shirt, (and) shoes. It was a good way to speak English very quickly. It was so successful that by the fall there were people who couldn’t detect an accent in my English.

Beth: Mount Joy Public School was a two-room schoolhouse and is now part of the Markham Museum. There was no kindergarten in the 50s. Grades 1-4 were taught in the lower level classroom with grades 5-8 in the upstairs room. Sitting in the grade 3 row,  I could listen in on the lessons taught to the kids near me in grades 2 and 4.  We had very good teachers, except for one male teacher who used the strap a lot to discipline the older kids. I was lucky to be downstairs with Mrs. Ingalls, who taught without resorting to the strap. I was in grade two when I started going to Mount Joy Public School. After school, I’d walk half a mile home, then meet friends to play at the “Pit,” an unused gravel pit (located on the current Swan Lake property) filled by springs and rainwater. In good weather, we were always outdoors—playing hide and seek, building forts or catching fish and tadpoles at the “Pit.” We played for hours and lost track of time. As soon as I heard my dad’s whistle though, it was time to head home for supper. In the wintertime, the frozen “Pit” was our skating rink.

Gunter: At that time, you knew and trusted everyone. The neighbours became part of the discipline procedure for some of us. Neighbours knew each other, and when a kid pushed the limits, whether it was firecrackers for Halloween or other pranks, they didn’t hesitate to speak up, telling you to stop it “or else.” I’ve seen adult neighbours give one of my friends a cuffing and tell him to “smarten up” or they’d tell his dad. Back then, most parents appreciated neighbours keeping their kids in line.

Beth: Back in the ’50s, when you walked up Markham Village’s Main Street, you knew and greeted everyone.