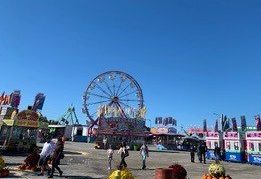 The Markham Fair has been educating and entertaining residents for more than 160 years.

The first Markham Fair was held on five acres of land donated by Captain Armstrong. At first, it was situated on the southeast corner of the intersection of Highways 7 and 48.

Then, in 1977, the fair moved to its current location, where it now runs annually for four days before Thanksgiving.

Since then, Markham Fair has been able to provide the local community with a showcase of talents and products in a friendly and competitive environment.

The Markham Fair group has grown to include over 750 volunteers who are tasked with serving on over 75 committees, earning it the title of the largest community-based volunteer organization in Canada.

The Markham Fair offers a variety of entertainment options, including midway rides, a tractor pull, a demolition derby, and horse pulls.

The Markham Fair is officially back after a two-year hiatus. People of all ages and diverse backgrounds were present at the Markham Fairgrounds, which was lively. The different Markham Fair vendors were incredibly enthusiastic about the fair’s reopening.

“We have an increase in sales, but more importantly, I take great pride in educating consumers about the four different grades of maple syrup,” Clancey said.

Many vendors sought to take advantage of Markham Fair to inform and educate the people of Markham.

In particular, Markham Fire and Emergency Services has taken the initiative to spread awareness of smoke alarm installation and maintenance. They handed out leaflets and instructive books to kids. By making these books available to our multicultural population of Markham in a number of different languages, Markham Fire & Emergency Services demonstrated their commitment to diversity.

Markham Fair always takes place a week before the Thanksgiving weekend. It runs from Thursday to Sunday.