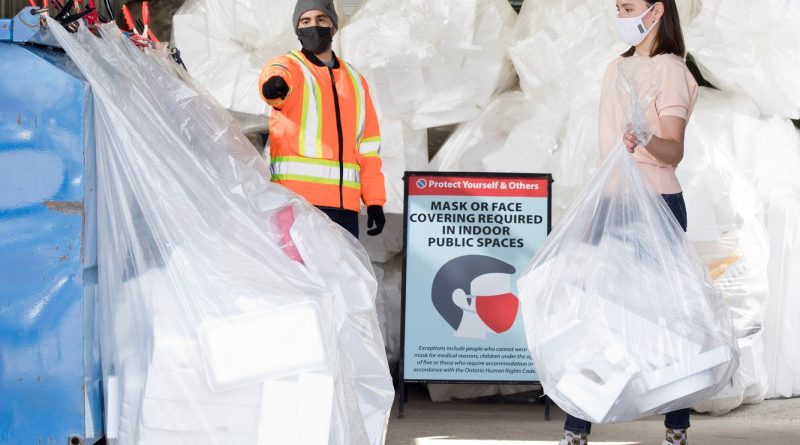 A City of Markham initiative that has doubled the amount of Styrofoam recycled since its launch has earned a national stamp of approval.

“Taking the Lead – Markham Targets Single-Use Plastics” received the 2021 Canadian Association of Municipal Administrators (CAMA) Environment Award in the 100,000+ population category in a Virtual Awards of Excellence Ceremony held May 11.

“CAMA is pleased to recognize Markham for its new initiative to educate residents about diverting single-use plastics from landfill,” said Jake Rudolph, outgoing president of CAMA and Chief Administrative Officer for the City of Nanaimo, B.C. “This project will assist the City to meet the goals set in their larger Waste Diversion Strategy.”

“Taking the Lead” outlines a phased plan for reducing and recycling single-use plastics sent to landfill. Waste audits performed by Markham revealed a growing volume of Styrofoam packaging – the result of the emerging online shopping trend and increased home delivery of household products such as appliances and furniture. Residents have been required to recycle Styrofoam packaging at a Markham Recycling Depot since City Council approved a curbside collection ban of Styrofoam packaging starting in October 2020.

“The City of Markham is honoured to be recognized for our Single-Use Plastics initiative that has greatly reduced the amount of plastics sent to landfill, further advancing and strengthening our sustainability goals and objectives,” said Markham Mayor Frank Scarpitti. “Markham has doubled the amount of Styrofoam recycled since this initiative launched, which stands as a testament to the determination and commitment of residents who want to shape a greener future and reduce greenhouse gas emissions.”

To find out more about the City of Markham’s award, as well as the other 2021 CAMA Awards of Excellence winners, visit camacam.ca/awards and look for the award recipients link. To learn more about the City’s recycling program, visit markham.ca/recycling and click on the Single-Use Plastics link.

Every year, Canadians toss out three million tonnes of plastic waste and only nine per cent gets recycled, which means the vast majority of plastics end up in landfills or littering the environment, according to the federal government. Last fall, it announced a federal ban of single-use plastic products, with regulations finalized by the end of 2021.

Styrofoam packaging is brought to a Markham Recycling Depot, where it is densified and shipped to recycling markets.