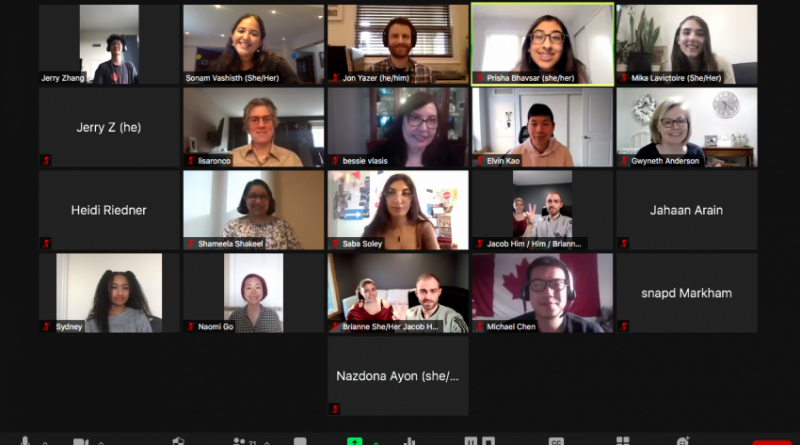 Local youth hosted a media event this spring to celebrate cross-partisan agreement on the issue of mental health.

It speaks volumes that in a time of political polarization, politicians from across the political spectrum are in agreement about prioritizing action to tackle the mental health crisis.

Future Majority is a national, non-partisan, non-profit organization that aims to amplify the voices of young Canadians so every candidate, politician, and party is an advocate for youth priorities.

Future Majority teams across the country have seen politicians from the NDP, Green, Conservative, and Liberal parties in ridings across the country committing to engage in the common cause of improving access to mental health care for all Canadians.

“Mental health has been a struggle for me this past year,” said Naomi Go during the event, a volunteer with the nonpartisan nonprofit Future Majority. “This crisis touches the lives of my friends, family, and colleagues too. I’m so pleased to see candidates in Markham showing leadership on this important issue.”

During the event, Courtenay Field, a volunteer with the non-partisan non-profit Future Majority said, “Covid has been hard for all of us. It’s a time when I myself faced unforeseen challenges within my career and was unable to get the regular support I would from friends and family. Now more than ever, Canadians, particularly young Canadians like me, are experiencing increased mental health challenges and looking for support.”

Future Majority volunteers in Markham and Aurora-Newmarket have engaged hundreds of youth to rally support for action on mental health through petitions, social media, meetings with local politicians, and unique social media posts. Both ridings had 65 Future Majority volunteers on their teams, engaging over 150 young people through innovative digital house parties. “This event shows that our political leaders are responsive to young voters and can put aside their political differences to tackle pressing problems like the mental health crisis in Canada,” said Future Majority Media Captain Prisha Bhavsar.

Future Majority volunteers understand that with a minority federal government, an election could happen at any time. Saba Soley, the Markham Media Captain says “Because young people are the largest voting block and have voted in record numbers the past two federal elections, young Canadians have the power to make mental health an issue that every politician and party prioritizes.”

“From engaging with hundreds of youth here in Newmarket-Aurora, and tens of thousands nationally, we know young people are deeply concerned about access to mental health care and they are going to be thinking about mental health when they head to the ballot box,” said volunteer Julia Mellary.

Local representative from the Newmarket-Aurora NDP Riding Association, Kevin Shackleton also acknowledged the importance of prioritizing mental health on the campaign trail in the upcoming federal election, “I’d like to assure you that the NDP is well aware of the importance of the issue and were we to form government or to have influence over the government we would make sure that additional funds were allocated to mental health.”

MP Bob Saroya of Markham-Unionville also acknowledged the importance of prioritizing mental health on the campaign trail in the upcoming federal election. In a written statement, he noted, “I was happy to sign the letter for Cross-Partisan Support on Mental Health, put forward by Future Majority. This pledge states that we must do more to improve access to mental health support for all Canadians. I firmly believe that it is time to make it clear that mental health is health, and to treat it properly.”

Elvin Kao, the Markham Green Party Candidate, spoke to the power of the youth vote: “I think it’s great that young people are seeking out support – it’s the responsibility of the government to respond in an effective capacity. The current pressures and needs of youth aren’t entirely understood by the people who currently hold power, and youth mobilization can change that.”

Photo: Future Majority aims to amplify the voices of young Canadians so every candidate, politician, and party is an advocate for youth priorities.