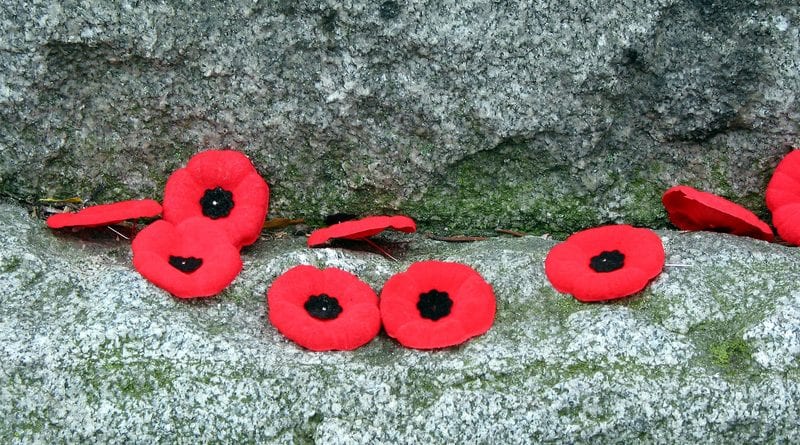 Ward 5 Councillor Andrew Keyes admits he was a little taken off guard when Markham Mayor Frank Scarpitti asked him to chair the committee for this year’s Remembrance Day activities at the Flato Markham Theatre.

While his father and uncle had fought in World War II, he wondered what had he done to deserve such a tremendous honour. Especially with this year marking the 75th Anniversary of the D-Day Landings and the Battle of Normandy.

“It was an honour, but I almost felt like I didn’t deserve that honour because I wasn’t part of that process,” Keyes said ahead of the city’s Remembrance Day events scheduled for November 11 at the Flato Markham Theatre, from 10:30 a.m. to noon. “I was a little uncomfortable frankly, and I had to think about it, but at the end of the day it’s important to remember and somebody has to do it.

“It was interesting how I felt it was such an honour, but why me? What have I done to deserve this? I’m certainly looking forward to the program.”

This year’s event will centre around the anniversary of the Normandy, France landing operations that began on June 6, 1944, during World War II. More than 156,000 allied troops from Canada, Britain and America landed by sea and air on five beachheads and would help liberate Western Europe and lead to the defeat of Nazi Germany and the end of World War II.

Of the more than 14,000 Canadian troops who were involved in the invasion, 369 were killed on D-Day alone. A total of more than 5,000 Canadian soldiers would die during the two-and-a-half-months of fighting in Normandy.

For Keyes, the importance of the day is not just about remembering the sacrifice these brave soldiers made but remembering what they stood for and what they fought for. While things are pretty good these days, people do forget and the stories get further and further in the past and get less real. Which is why these Remembrance Day events are so important in making sure this is passed on to future generations.

“I think of those who sacrificed, but that remembering is two-fold,” Keyes said.  “Remembering those, but remembering what the sacrifice was for and that’s what continues. I think appreciating what we have. I’m concerned we’re getting a little complacent when it comes to some of the values our veterans fought for. As I’ve said, as it becomes so distant, the risk isn’t perceived to be there but those values are still values we hold today and I just think it’s really important that we understand they’re worth fighting for.

“I guess coming out of (the ceremonies), it’s renewing that with those are in attendance, but certainly help carry the message to folks that aren’t there that day. And I guess I’m speaking to the younger generation, sort of appreciating not just the sacrifices, but the values that we hold so dear.”

Keyes was hoping to arrange for a veteran from D-Day to give a first-hand account of the allied invasion, but with 75 years past we are losing more and more of the surviving veterans and he was unable to find someone that was physically able to come out and speak.

They do hope to show a video of the historic day.

“It’s getting harder and hard to find people to share those experiences,” he said.

Keyes said students from one of Markham’s public schools will do a recital, while following the scheduled end of the activities, at approximately noon, a lunch will be held for the veterans invited at the Markham Civic Centre.

Doors at the Flato Markham Theatre will open at 10:30 a.m., with the event expected to officially begin at 10:50 a.m. The Canadian national anthem will be played at 10:55 a.m., followed at 11 a.m. with Act of Remembrance by the Markham Fire & Emergency Services Honour Guard. This will be followed by a prayer, a number of songs and Councillor’s addresses beginning at 11:05 a.m.

The Youth Poetry Contest winners will be announced at 11:30 a.m., followed by the flag raising outside at 11:50 a.m. All times are approximate.

The annual Remembrance Day parades return with one on Main Street Markham on Nov. 9 and one on Unionville Main Street on Nov. 11.

The Markham District Veterans Association parade takes place around 10:30 a.m. The parade heads south on Main Street Markham, concluding at the cenotaph at Highway 7 for the laying of the wreaths.

The annual Nov. 11 parade takes place on Unionville Main Street. It starts at the Unionville Millenium Bandstand and heads north to the cenotaph at Crosby Arena concluding with a minute of silence at 11 a.m. after the laying of the wreaths.