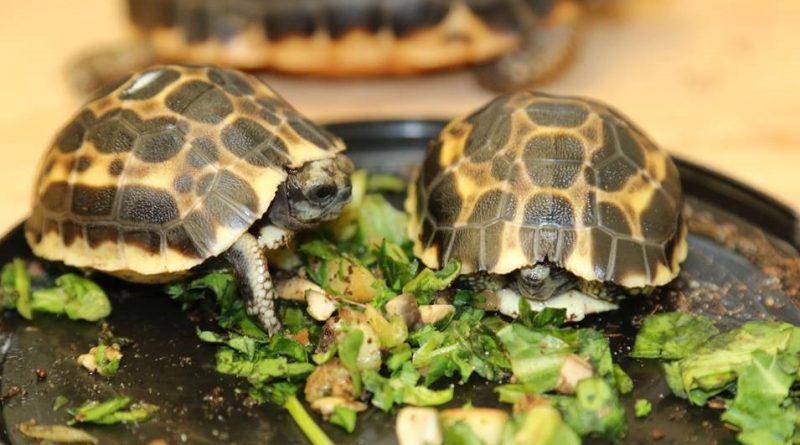 After an extensively monitored incubation period, these are only the second and third hatchings of the species at the Toronto Zoo, the first being in 2020.

As its name suggests, this species is characterized by the beautiful web-like patterns of yellow and black lines radiating across its upper shell or carapace.

The Madagascar spider tortoise is listed as critically endangered by the International Union for Conservation of Nature (IUCN). Populations in the wild are declining due to habitat alteration and collection for food and the pet trade.

To stimulate breeding, the adults need to go through a period of dormancy with reduced temperatures. This brumation phase simulates a seasonal change where conditions are less than optimal for the tortoises in nature. When the tortoises come out of brumation, they are ready to mate. Successful breeding results in a small number of eggs (usually only one per clutch) being laid by the female.

During incubation, the eggs need go through a diapause, a suspension in development of the embryo, before successfully hatching. This is where the incubation temperature begins at 28-30C for several weeks and is then gradually dropped and held at a lower level of 20C for several weeks. This diapause corresponds to times of adverse environmental conditions that eggs would be exposed to in nature when development would be unfavourable. The temperature is then gradually brought up and embryo development resumes. At hatching they weigh around 13 grams, the same weight as two toonies. More exciting news may still be to come as a third egg that was laid on January 1 is currently in its cooling period and the zoo staff are watching for signs of development.

“This complicated mating and incubation process highlights the delicate nature of this critically endangered species and the intricate care they require from Keepers to thrive,” said Rick Vos, Lead Keeper of Amphibians and Reptiles, Toronto Zoo.

“Successful breeding is the foundation for species conservation,” said Dr. Gabriela Mastromonaco, Director of Conservation Science. “These hatchlings represent the level of care and expertise provided by the talented team at your Toronto Zoo.”

“This is your Toronto Zoo living our mission of connecting people, animals and conservation science to fight extinction,” Toronto Zoo CEO  Dolf DeJong said. “It’s our commitment to support meaningful conservation actions to make a positive difference for wildlife and the births of these endangered tortoises strongly demonstrates that.”

The Toronto Zoo first started working with this critically endangered species in 2007 and this marks the third successful reproduction.