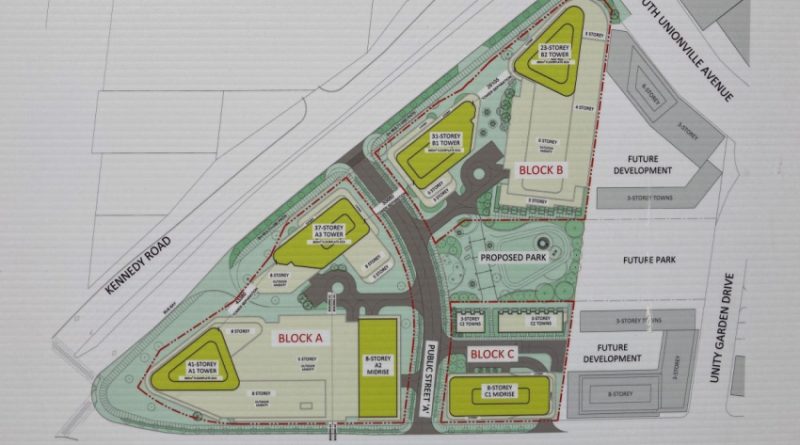 The purpose of a City of Markham Development Services Committee Public Meeting Sept.6 was to receive feedback from members of the public on a development proposal. The consensus was a resounding thumbs down.

The site’s total area is 2.7 hectares or 6.7 acres, with 280 metres of frontage along Kennedy Road.

David Charazenko, senior associate with community planning firm Bousfields Inc., represented the owner at the meeting and provided an overview of the proposed development.

The development would offer 1,772 residential units, 2,032 square metres of street-level retail units, and a new 0.268-hectare (0.662-acre) public park. A new road running north to south would dissect the site, with 748 metres of bike lanes and several pedestrian paths.

The proposed density of the development is a floor space index (FSI) of 5.29. FSI means the ratio between the gross floor area of a building to the land area on which it stands.

With proximity to community infrastructure assets, including Markham YMCA, the PanAm Centre, the future York University Markham Centre Campus, and easy access to transit, the site is considered to be within an urban growth centre.

At the onset of the meeting, Development Services Committee Chair Keith Irish stated that “no decision has been made on these applications, and a final decision will not be made tonight.”

The committee heard from approximately 15 deputants with several concerns about the proposed development.

Most were residents of the South Unionville community, who spoke earnestly about why the scope of the proposed development is harmful to their neighbourhood.

“These residents are going to be living behind the buildings, in the shadows,” said Jerrica Lin, candidate for Public School Board Trustee for Wards 3 and 4 in the upcoming municipal election. She explained she was at the meeting to “be a voice” for area residents who “need to be heard.”

“Is this what the residents want, or is it what the builders want?” she asked the committee and attendants.

Her suggestion that elected officials must do more to stop the development prompted diplomatic responses from Irish and Ward 3 Councillor Reid McAlpine.

“I’m going to remind everyone of something I said at the beginning of this meeting, that the purpose of this meeting is to receive feedback from members of the public on the proposal that has been submitted,” Irish said. “No decision, I emphasize, no decision has been made on this application, and a final decision will not, again emphasized, will not be made tonight.”

McAlpine explained that an owner of any property has the right to propose anything at any time. “And we as council are obligated under law to consider their proposal.”

“We could be sitting here tonight considering 100-story towers if that’s what the developer had put forward. We don’t really have a choice. We’re here to deal with it. And you talk about public consultation – that’s what we’re here to do,” offered McAlpine, adding, “I just want to reassure everyone – we’re a long way from this decision.”

Deputants continued to voice their concerns, either in person or virtually.

Central to their worries is the substantial increase in population density that the 1,772 units would bring to the South Unionville neighbourhood.

As Tom Han, president of the South Unionville Resident Forum (SURF) noted, adding 1,772 units to the existing South Unionville community of 2,054 means a population increase of approximately 86 per cent.

Deputant after deputant expressed worry about the impacts the development would have on an already overcrowded Unionville Meadows Public school and parks, traffic congestion, and the inability for public transit to meet the demand of the concentrated population.

Added pressure on Markham Stouffville Hospital and the need for more community centres and libraries to support the density increase were among other issues expressed.

Several spoke about the imposing nature of the development on the neighbourhood and the negative effect on the community’s character.

One resident spoke about purchasing a unit for his retired mother in the 12-story building just north of the proposed development site. He talked about paying a “premium price” for a south-facing unit high in the building so that his mother could enjoy the sunshine and views the new development would block.

John Michael Lee, a resident and area business owner, urged “a better and brighter Markham doesn’t necessarily have to be at the expense of the local community or by ruining the city with high-rises.”

Angst about the overall impact on residents’ health, safety, and well-being echoed throughout the deputations.

Several expressed concern, however, that even a 200-metre radius is low for a development of such significance. One deputant suggested that notices should be communicated in Chinese, given the significant representation of Chinese-speaking residents in the South Unionville neighbourhood.

A question was also raised as to the visibility of two signs required by law to be erected by the property owner to notify the public about a development application.  It was suggested that signs were located in such a way that few would actually see them.

Sabrina Bordone, senior planner for the City of Markham, confirmed that a request had been put forth upon hearing about the concern to relocate the sign on Kennedy Road to ensure better visibility. Shortly after the Sept. 6 meeting, the sign was moved to a more prominent location.

The development’s disproportionate availability of commercial, retail, and other mixed uses was raised, as was the question as to whether policy goals in the Secondary Plan strategy, such as complete communities, a net-zero energy plan, and waste handling, were being considered.

Miasek, on behalf of the URA, also questioned the timeline for the development, referring to a discussion in an Aug.24 community information meeting that the development would not start for at least 10 years.

“Undoubtedly, there will be changes to the proposal between now and then, so why are we collectively expending all this time and energy on the project now?” he asked the committee.

David Charazenko explained that the BMW dealership has an approximate lease term it has yet to fulfil of approximately five years and an option to renew for an additional five years.

Despite the stream of worry communicated by residents, committee members supported assertions by Irish and McAlpine at the start of the discussion that a decision about the development proposal is a long way off with much to sort out in the process.

“If we grant more density here, and we have a cap on the total population from Markham Centre, that means we have to take some density from somewhere else, and who are we taking it from? (Do we) ask another developer to give up some of their density so (this developer) can have it here? That’s just not going to happen,” said McAlpine.

Regarding the matter of a possible 10-year timeline before the proposed development may start, he suggested that a lot can change in that amount of time.

“I look forward to hearing from the developer what they have learned from tonight’s resident deputations and what they’re prepared to address or modify to reflect your concerns,” said Regional Councillor Joe Li.

“We just opened the book. We’re on page one, two, or three on this one that’s got 200 pages to go. So there’s a lot more to come,” offered Regional Councillor Jack Heath.

“So there are layers to this that are ongoing, and definitely what we’re doing right now is we’re continuing discussions with the landowner as we hear from the public and their input,” said Stephen Lue, senior development manager for the City of Markham.

Irish thanked the residents for their preparation and input to the meeting and assured them that although members of council make final decisions on these applications and requests, it is also important for planning staff to hear their input as they make recommendations to council.