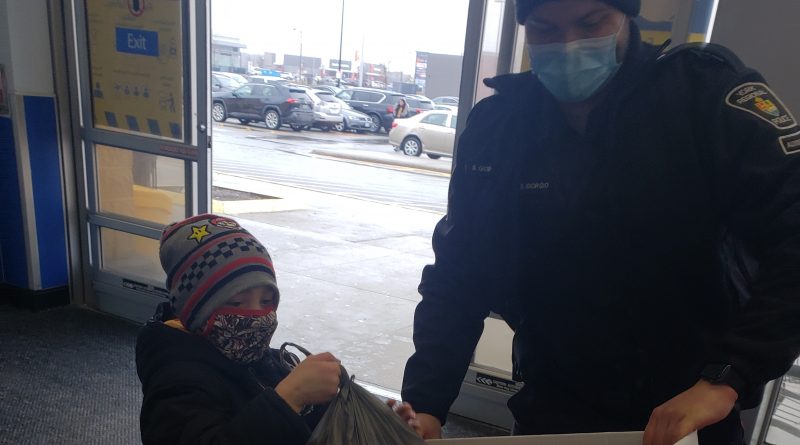 Volunteers were able to engage with community residents about the FBYR’s food security efforts, accept non-perishable food donations, collect monetary donations, and hand out YRP and FBYR branded stickers and magnets as a thank you to generous donors.

“The energy level was high, and people who donated were thanked with loud cheers” explains Susan Horne, a volunteer at the Food Bank of York Region.

“It was a lot of fun and I got to help pack the food into the police cars for all the people who don’t have any food to eat,” said seven-year-old Markham resident Remy Dastranj, the youngest volunteer at the Food Bank of York Region.

After just four hours, the FBYR volunteers and YRP officers were able to collect 1200 pounds of non-perishable food items and just over $1000 in cash donations, despite the bad weather.

The FBYR is an avid supporter of community fundraisers and food drives and actively encourages members of the community to get involved by hosting their own in-person, online and peer-to-peer fundraisers.

For more information on food drives and fundraisers with the FBYR, visit https://fbyr.ca/food-or-fund-drives/.

The Food Bank of York Region is the regional food hub and mobile food pantry with a network of 75+ social service agencies and emergency home delivery programs. The network supports food programs in the nine municipalities of York Region, serving 24,000+ individuals in 7,000 households. The COVID-19 pandemic increased the number of people accessing food bank programs in York Region by 42 per cent from 2018, expanding the threshold of food insecurity to a larger scale of members of our community.