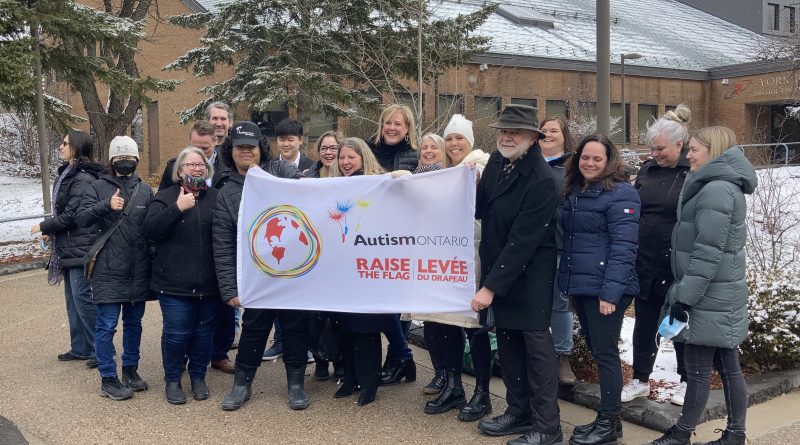 As part of its commitment to building more inclusive communities for people with autism, the York Region District School Board held a flag-raising ceremony at its education centre in support of World Autism Awareness Day.

“Together, we support our learners with Autism Spectrum Disorder (ASD) by understanding and valuing their individual strengths and needs, and by building learning environments where they matter and belong,” said Associate Director of Education Programs Steven Reid.

The internationally-recognized day is sanctioned by the United Nations and is held on April 2 to increase understanding and acceptance of people with autism. The theme of this year’s event is Celebrate the Spectrum.

“As in previous Autism Ontario World Autism Day campaigns, Celebrate the Spectrum campaign unites families, schools, communities, government and professionals in recognizing World Autism Day through celebrating people on the autism spectrum while bringing to light the systemic barriers that must be removed to create a more supportive and inclusive Ontario,” says Marg Spoelstra, executive director of Autism Ontario.

Autism is a lifelong neurodevelopmental disorder that affects the way a person communicates and relates to people and the world around them. It can affect body language and posture, social interactions and relationships, how an autistic person engages with their interests and sensory processing capacities.

Because autism exists on a spectrum, the degree to which each autistic person experiences those differences and the support they need will vary. One in 66 Canadian children and youth are diagnosed with ASD, according to the most recent statistics from the ASD Surveillance System.

Photo of the flag-raising ceremony at the board’s education centre in Aurora on April 1 courtesy of the York Region District School Board.