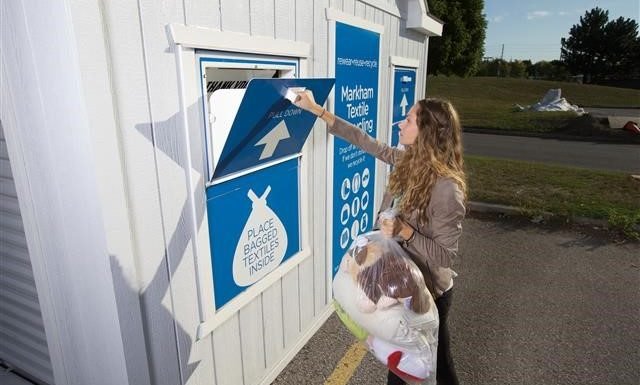 The City of Markham’s award-winning textile recycling program has reached a major milestone: keeping more than 20 million pounds (907,000 kilograms) of unwanted textiles out of landfill.

Throughout the COVID-19 pandemic, the city has safely maintained textile program operations to protect our planet and support local charities when they need it most. In the past 13 months alone, residents have dropped off more than 3.5 million pounds (158,000 kilograms) of textiles at Markham’s 160 city-operated bins.

“The success of the program is a testament to the determination and commitment of Markham residents who want to shape a greener future and reduce greenhouse gas emissions.”

Markham’s first-of-its kind textile recycling program was launched as a response to findings that each household in the community was sending approximately 33 pounds (15 kilograms) of textiles to landfill every year when an estimated 95 per cent of this could be reused, resold or recycled into new products.

In April 2017, Markham became the first Canadian city to ban textiles from collection in the garbage or blue box.

The City of Markham encourages residents not to let fashion go to waste. The recycling program accepts all textiles, even items that are torn or stained, including:

Items in good condition are sold at thrift stores, diverting unnecessary waste from landfill, saving natural resources and helping to generate funding and jobs to help those in need through The Salvation Army Thrift Store, Diabetes Canada and Value Village.

Items that cannot be reused or re-worn will be recycled into new products, such as rags, paper, insulation or shredded for stuffing or fiber recycling.

Markham’s textile program has been recognized with awards from both the Institute of Public Administration of Canada and the Canadian Association of Municipal Administrators (CAMA). It serves as a strong model for other municipalities to follow.

The program was made possible through a $67,000 grant from the Federation of Canadian Municipalities under the Green Municipal Fund.

Remember that you can reduce, reuse and recycle by:

As a leader of sustainable practices in North America, the City of Markham prides itself on its eco-friendly infrastructure and facility improvements, its 80 per cent curbside waste diversion rate, the Greenprint –  Markham’s Community Sustainability Plan and its commitment to educating, enabling and inspiring members of the community to achieve net zero emissions by 2050.