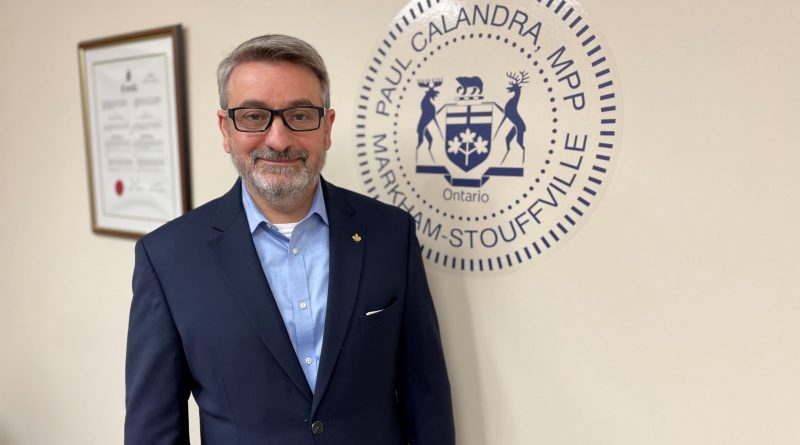 Paul Calandra has been a fixture in broader Markham public life for a number of years now.

First elected as a member of parliament in 2008, he was elected as a member of provincial parliament for Markham-Stouffville in the 2018 election that saw a blue wave of new MPPs wash away representatives of the Wynne Liberal government. But he’s been increasingly noticed across the province as he’s been entrusted more responsibility from the Premier over the last few years of the Progressive Conservative government.

Appointed government House Leader in 2019, Minister of Legislative Affairs in 2021 and recently tasked with being the Ministry of Long-Term Care, Calandra has been thrust to the fore of one of the province’s most pressing issues of the day — how we care for our elders.

Over-capacity hospitals and hallway medicine had already rung alarm bells about healthcare and how we will deal with a large, rapidly aging Boomer population as well as a generation of Boomer and Gen X’s parents that are already in late retirement. A crushing pandemic not only heightened the sense of urgency to deliver LTC beds, but also the resources to make them functional.

That sense of urgency has been met with a flurry of funding announcements for more LTC beds with over 30,000 new beds promised by 2028 and a further 25,000 current beds to be upgraded, meaning capital investments made to older buildings to bring them up to modern standards in terms of spacing, ventilation and other building requirements.

Calandra notes his home riding of Markham—Stouffville alone will benefit from well over 1000 LTC beds including 330 at the just-finished Mon Sheong in Stouffville and an additional 224 just announced there. The broader Markham and Stouffville area will see almost 1600 new beds in total including 320 at another Mon Sheong being built in  Markham.

“We’re getting more (LTC beds) in our riding being built between now and 2028 than the entire province built between 2011 and 2018,” Calandra notes, taking a clear shot at the previous government on the issue.

The financial investment in new beds alone, all to be subsidized to some degree by the provincial government, will amount to $6.5 billion.

“At the same time we are building, we are also increasing staffing so that every patient gets four hours of care a day,” Calandra says. “That requires an additional 27,000 nurses, PSWs and other healthcare workers that support that level of care.”

That price tags will top $5B additional dollars and will include funding for college training programs, some already announced.

Part of the LTC challenge is finding building partners that have the expertise to build modern LTC homes and making sure the LTC beds are available in communities “close to home.”

As onerous as the LTC portfolio is, Calandra also maintains his portfolio as Minister of Legislative Affairs, which ensures proper upkeep and updating of the physical buildings as well as his role as House Leader, ensuring a 12-hour work day on average.

Calandra laughs a little when I ask him what he does as house leader, noting that not many people do know or probably care. But there is a lot to it.

“Nothing happens in the (legislature) that isn’t approved by the House Leader — when you speak, who speaks, the topic that you speak on,” he relates. This includes what time is allotted to various bills or topics and issues of government administration. The position also involves a surprising amount of interaction with opposition parties negotiating everything from COVID protocols, which Calandra notes, they agreed on with unanimous consent, to modernizing the way business is conducted like electronic voting and conduct and rules for debate. This is one of the central areas of accomplishment Calandra points to in his role.

“We’ve completely modernized how the legislature works. We’ve done that through standing orders,” he offers, referencing the decrees generally made by the house leader or house speaker that are designed to ensure proceedings are conducted in a manner that, in official prose, ‘respects the democratic rights of members.’

To this point, Calandra believes that they have bettered the ability of members from all parties to represent their constituents, giving more speaking time to opposition and backbenchers and putting cameras in the legislature and committee rooms to aid transparency of process.

“If you were not a member of the government then, and by that, I mean in cabinet, or you were in the backbenches or in the opposition, your ability to influence anything was zero. Your chance of ever passing a (private members bill) was very, very, limited.”

“We have returned a lot of power back to the members without sacrificing the government’s ability to get things done,” he says citing an increase of private member bills being passed from all parties and more power being returned to committees.

This idea of creating a more responsive legislature is a theme revisited a few times by Calandra in our conversation. This is top of mind and seems to be informed by his time in Ottawa.

“(Provincial government) is far closer to people than Ottawa. It impacts people very directly,” Calandra says. “And I guess I didn’t really appreciate that fully until I got to Queen’s Park. Education, health care, long-term care, these are all issues I’m experiencing with my family. Impacts (constituents) every single day more so that what we were doing in Ottawa often did.”

Calandra goes on to cite a laundry list of accomplishments he feels his government has delivered including the responsible management of COVID, cutting red tape for business, increased job numbers over pre-COVID tallies among others.

But he finishes with a pledge to support however many Ukrainian refugees Ottawa can direct to Ontario, noting that the influx can be a key part of provinces economic development, which Calandra says will be their focus over the next while.

“Whatever we can take, we will,” he says. “We will support and resettle them.”

Voters of Ontario will get a chance to vote on whether the PC government has been successful in their endeavours in the next provincial election slated for June 2 of this year.