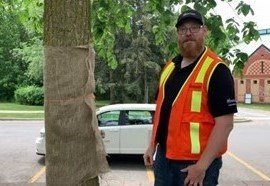 If you have an oak tree, you may be concerned if it has little to no leaves this year.

Rest assured, it’s likely still alive but you may want to trap the caterpillars causing the damage.

The European Gypsy Moth – Lymantria dispar dispar (LDD) – is infesting parts of Canada, the U.S. and Mexico for a second year, the City of Markham reports. This is a natural part of the LDD’s lifecycle, which includes a very noticeable population boom every seven to 10 years.

Markham has seen small pockets of LDD activity in all wards, with the largest concentration of activity in Wards 1, 3 and 4. It’s using a sustainable approach to managing LDD and at this time, hasn’t sprayed affected trees as a method of control. In March and April, staff manually removed and destroyed LDD egg masses from about 6,000 City-owned trees and encouraged residents to do the same for trees on their property. 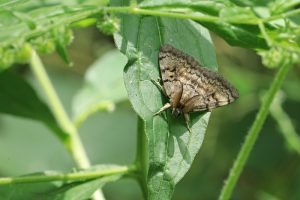 The city is also working with York Region and neighbouring municipalities to monitor LDD activity and the size of the spread. During severe outbreaks, trees can be completely defoliated. The tree may produce a new set of leaves but may also store the energy to set buds for next year’s leaves. Even if all leaves are gone, it’s important to water the trees on your property to provide them with the energy to grow new leaves.

Though LDD caterpillars prefer to feed on oak tree leaves, they will also eat the leaves of many other species, including maple, elm, birch, poplar and willow trees. The damaging caterpillar stage lasts for about seven weeks and during that time, the caterpillars will crawl down the tree to hide from natural predators during the day and crawl back up the tree to eat at night.

Squirrels, chipmunks, raccoons, skunks, birds and insects won’t be able to eat all the caterpillars, but you can do your part to help.

From now until August, you can trap the caterpillars by wrapping a piece of burlap around each tree trunk for them to hide. Check underneath the burlap every afternoon and put the trapped caterpillars into a bucket of soapy water for a day or two before putting them in the garbage. Be sure to wear gloves to prevent skin irritation and reactions.

In the late summer and fall, the LDD caterpillars will turn into moths and lay more egg masses. From August through next spring, scrape the egg masses off the trees and soak them in soapy water for a day or two before putting them in the garbage. Every egg mass you can remove means fewer caterpillars next spring.

Natural control factors such as disease, parasites and predators eventually combine to cause a collapse of such outbreaks. If you’d like to spray your trees, the city recommends hiring a certified arborist who can safely provide this service. Treatments should be applied in early spring to be effective following the recommendations of the licensed applicator. For more information, visit markham.ca/LDDMoth or york.ca/LDDmoth or contact the City of Markham Contact Centre at 905-477-5530 or [email protected].

Pictured is a screenshot of Miles Peart, City of Markham Supervisor of Operations | Parks Forestry demonstrating how to install a burlap banding trap in a  YouTube video.