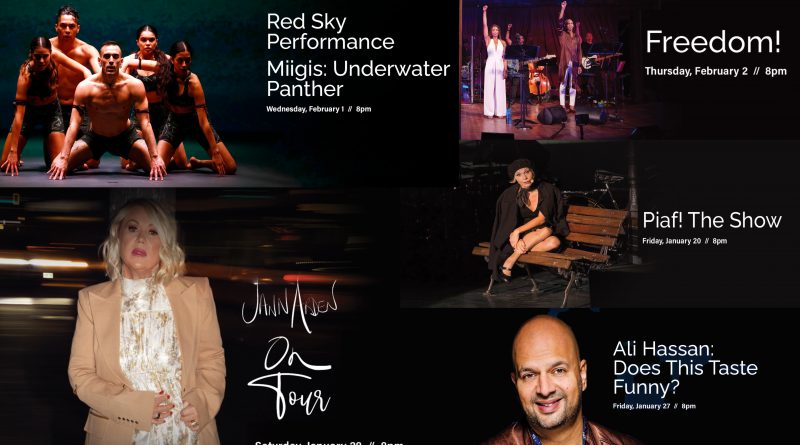 Looking forward to a great year in 2023, the Markham Theatre has a strong series of shows lined up for its patrons.

The road back to life feeling normal has been a mix of excitement and caution for all. The theatre’s general manager Eric Lariviere is excited that there have been far more ups than downs.

As the holiday season subsides, the new year at the theatre begins on Jan. 20 at 8 p.m. with Piaf! The Show.

It tells the story of legendary singer Edith Piaf through her unforgettable songs with truly original staging featuring images and unpublished writings from her career. Conceived and directed by Gil Marsalla, Piaf! The Show is considered by many to be the most beautiful tribute ever produced to the career of Edith Piaf. With more than 400 performances in 50 countries, it seems the world agrees.

“This show has got to be the single greatest presentation of Piaf’s work in the world today,” Lariviere says. “I know it sounds like a lot, but the show is brilliant, accessible and full of great music.”

The following week, acclaimed comedian Ali Hassan brings his current tour to Markham. Before comedy became his ‘signature dish’, Hassan initially ran his own catering business with aspirations of hosting a cooking show. This time in that industry has surely led to a feast of food-related material, but being the father of four certainly helps balance his comedic inspiration. Catch his show, “Does This Taste Funny?” on Jan. at 8 p.m.

“We had Ali host our season launch and he was brilliant,” Lariviere says. “We can’t wait to have his show here.”

What can be said about Jann Arden, who plays the Markham Theatre the very next night, except that she is iconically Canadian? Charmingly self-deprecating while surreptitiously brilliant as a singer, speaker, and performer; Arden almost apologetically invites audiences into her life and headspace and leaves her audience feeling warm and welcomed. The Jan. 28 performance promises classics, material from her most recent release, and her reactions to and reflections on life during a pandemic.

Feb. 1 sees the acclaimed Indigenous producer Red Sky Performance bring Miigis: Underwater Panther to the Markham Theatre stage. The show is about a prophecy which claims that the Anishinaabe should move west or perish. It chronicles the resultant, remarkable adventure from the Atlantic Ocean to the Great Lakes. The journey from salt to fresh water explores catalysts for movement, water trade routes, Anishinaabe archetypes, and mystery beings. Miigis uses dance, theatrical innovation, and a fusion of athleticism, music, and film to reveal the power of nature, and the rise of matriarchy.

“Red Sky has to be the leading creator of modern dance/multimedia shows in Canada today!” beams Lariviere. “We’ve been after them for years, and our so excited to present their work and, perhaps, take some small part in reconciliation by sharing these incredibly important stories.”

Freedom! was a huge success in last summer’s Stratford Festival Cabaret Series, featuring a company of ten superb Black performers and musicians. The Feb. 2 performance will explore the impact of black culture on North America through song. It would be an understatement to say that this impact is merely significant. From the moment Black people landed on North American soil, their music took root and became the basis for much of the popular culture we enjoy today. There is a seemingly endless list of exceptional Black musicians who have been lost to history; It’s time they got their due.

“This show has incredibly important stories to our community in Markham, and we really wanted to be part of telling them,” Lariviere says. “It’s guaranteed to be a great show!”

The very next night, Feb. 3, award-winning, multi-platinum-selling crooner Matt Dusk whisks you away to Las Vegas in 1966, where he pays homage to his hero Frank Sinatra. An energetic show with all the production value of a Broadway musical, this show promises a musical journey through Frank’s incredible career, including its ups and downs, hilarity and heartbreak. Dusk himself has gone on record saying that the show is “like Sinatra at the Sands.” The singer promises a night of “crooning and cocktails” and a “smokin’ band performing timeless hits that everyone knows.”

It should also be noted that there are independent producers offering shows as well. Markham at the Movies presents The Phantom of the Open on Jan. 24 at 7 p.m. A heartwarming true story of a dreamer and unrelenting optimist. Also, Kindred Spirits Orchestra presents The Sport of Music on Feb. 11 at 8 p.m.

Tickets for all shows available via the Markham Theatre Box Office. Visit markhamtheatre.ca for more details.

Photo: Highlights from the first month of shows at The Flato Markham Theatre in 2023