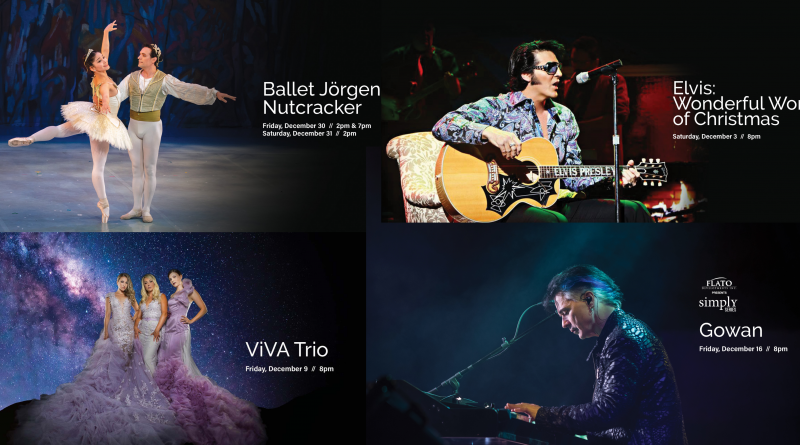 With the holiday season fast approaching, the Markham Theatre has a great slate of programming coming up.

This season has been a confident but careful one that has seen general manager Eric Lariviere make great strides toward rebuilding the live performance audience in Markham back to 2019 levels.

“Things are going well,” Lariviere reports. “No one has a crystal ball, but we are on track to getting back to where we were. We’ll see how it goes.”

December starts off early with perennial favourites, Classic Albums Live returns on Dec. 2. This show will highlight the early 80s landmark record, Breakfast in America by Supertramp. Often hailed as a modern-day, rock orchestra, the show features an impeccable note-for-note recreation of the album in question and then a second set that features hits and notable tracks by the same artist.

“I think it’s a brilliant concept,” explains Lariviere, “and their following is strong enough now that we can bring them every year. It’s a great night of music.”

On Dec. 3, holiday spirit collides with rock ‘n roll royalty with Elvis: Wonderful World of Christmas. World-renowned Elvis tribute artist Steve Michaels stars in this holiday show like no other. Expect faithful renditions of Presley’s holiday classics, such as Blue Christmas, Here Comes Santa Claus, and the gospel songs that were the cornerstone of Elvis’ identity and inspiration.

“I really wanted to program fun shows for this season,” Lariviere says. “Elvis is globally recognized, our audience loves his music, and Steve Michaels is the best tribute artist out there.”

Next up, on Dec. 8 is an evening that promises to be part Monty Python, part Mr. Bean, and even part Dr. Seuss.

O Christmas Tea: A British Comedy is a new work by London’s 3-time Impresario award-winning duo, James and Jamesy that they promise to be outrageously funny and reminiscent of classic British pantos. Expect physical comedy, wordplay and interactive elements to deliver the laughs.

The ViVA Trio comes to Markham next with their Light Up the Season Holiday Show on Dec. 9. This Canadian, all-female trio of sopranos set out to build cinematic soundscapes featuring their soaring vocals and three-part harmony which they bring to a set of classics from O Holy Night to Silver Bells.

“These great singers are right from our own backyard,” Lariviere says. “We showcased them when we launched the season, and I look forward to their full show too.”

The following week the theatre welcomes a Canadian music legend home when Gowan performs. Raised a few kilometres south in Scarborough, the Dec. 16 performance is as close as it gets to a hometown show for him. Expect international hits like “Strange Animal,” “A Criminal Mind,” and “Moonlight Desires” for sure but keep in mind that rarely does an intimate performance by a star like this go by without the feeling of magic in the air.

“Lawrence (Gowan) has a great fanbase,” Lariviere says. “When he communicates on stage, you can feel it right away. He’s fantastic.”

The month and the season come to a close with the restarting of a tradition with Ballet Jörgen’s The Nutcracker: A Canadian Tradition returning for three shows on Dec. 30 and 31. Acclaimed choreographer and artistic director Bengt Jörgen, whose recent piece based on Anne of Green Gables had its world premiere in Markham, created this version of The Nutcracker with both tradition and magic in mind.

It draws modern visual inspiration from the renowned McMichael Canadian Art Collection but keeps both the music and the story in place, despite other choreographers changing the story liberally. The result is a production that features a uniquely Canadian take on an international classic.

“The quality of Ballet Jörgen is great,” Lariviere says. “It’s a different show than you might see downtown, but there are more than a few that prefer his intimate, sort of, personal storytelling to the glitzy production at the National Ballet. We support them 100 per cent.”

It should also be noted that there are a few community producers offering holiday shows this month as well. The Markham Concert Band (Dec. 4), The Kindred Spirits Orchestra (Dec. 10), and the Toronto All-Star Big Band (Dec. 18) are all ready to warm local hearts this season.