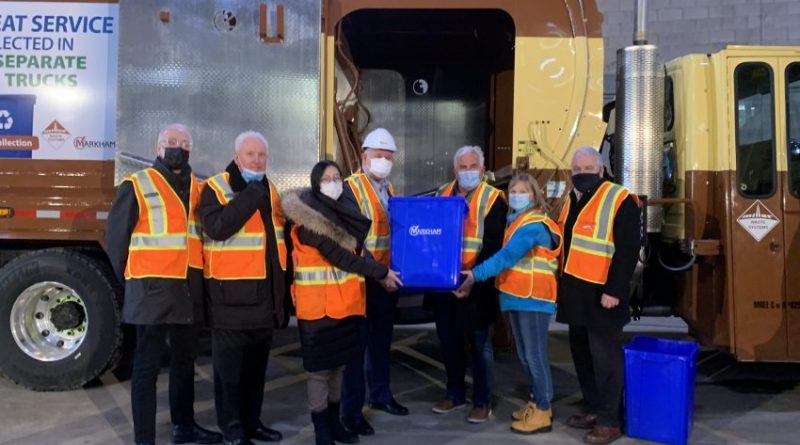 Blue box recyclables will be collected by a single compartment sideload truck. Green bin organics and clear bag garbage will be co-collected in a rear-load truck that has two compartments to keep material separated.

All waste will still be collected on the same day, but in different trucks at different times.  Collection schedules remain the same.

The changes are being made in anticipation of Ontario’s new provincial Blue Box legislation. In June 2021, the Ministry of the Environment, Conservation and Parks released the finalized Blue Box regulation under the Resource Recovery and Circular Economy Act, 2016.

“Markham has an award-winning legacy of environmental sustainability and this new contract will ensure that we are poised to continue building on that success,” says Mayor Frank Scarpitti. “The city’s environmental initiatives and excellent service levels go hand-in-hand with our residents’ commitment to properly sort their waste materials and increase waste diversion.”

In 2020, Styrofoam packaging was banned from curbside collection. Residents can take their Styrofoam material to any of the city’s four recycling depots. Thirty tonnes of Styrofoam were diverted from landfill and incineration between November 2020 and April 2021.

In 2017, Markham launched the Textile Recycling Program, which banned household textiles from curbside collection. As of 2021, the program had collected more than 20 million pounds of donations.

In 2013, the city introduced clear bags for garbage so collectors can see if recyclables, organics, hazardous and electronic material have been improperly disposed. Electronic waste like TVs and computers were banned from curbside collection that year to keep harmful metals out of the landfill and allowing valuable parts such as glass, plastic, gold, silver, copper and palladium to be recycled.