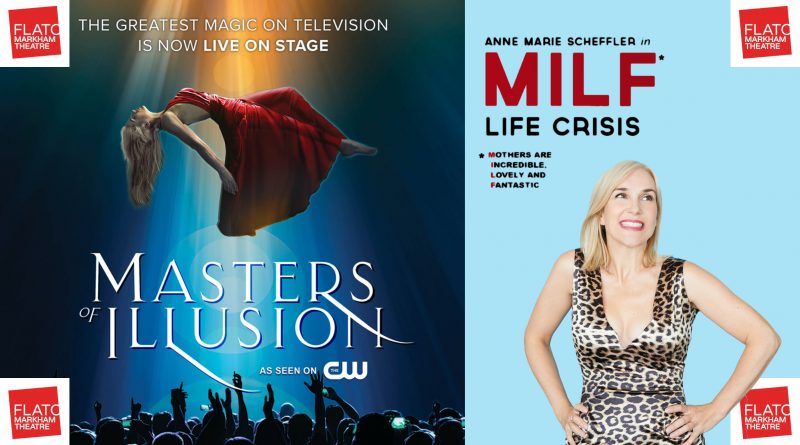 In a tradition that dates back to the days of gaslight; when a theatre is not in operation a single light is placed on a stand, centre stage, and is kept lit to ward off the total darkness. This tradition is mostly born out of safety, but many who make theatres their livelihoods believe that these “ghost lights’ preserve a tiny light of hope for performances to come.

It is safe to say that no one who placed a ghost light onstage in the middle of March 2020 expected to wait so long to extinguish it.

Gratefully, the time has come to return to our culture and to ourselves. The Flato Markham Theatre is reopening for performances in the new year.

The first shows back in the building will be with local rentals.

“It’s going to be a progressive re-opening, starting with our community first in January,” Lariviere says. “They’re our first priority.”

As one of the first regional theatres of its kind, designed for both community and professional use, it is important that the building is opening to community users first. The building has seen many brilliant professional performances in the decades that it’s been open, but it has been, arguably, more vital as a place for communities to gather, celebrate, and make art themselves.

“The weekend we shut down there were two shows we postponed,” explains Lariviere. “So we’re very excited to start back by picking up right where we left off.”

After this, there will be a series of new shows announced for the coming spring.

“Our new season will begin in March,” Lariviere continues. “We plan to make an announcement in December, but we expect to start with a pretty big ticket show.”

Folks who come to shows early in 2022 can expect, onstage, the same experience they’ve become accustomed to at the theatre. The quality and fidelity of performance will be at the same high standard.

However, to be as safe as possible, the experience in the house will still be following Provincial safety guidelines. Audience members must be fully vaccinated, masked, and some level of social distance.

“We’re going to have a very prudent approach; very safe,” Lariviere. says. “This is one of my biggest concerns. We’ll work within the framework of the provincial guidelines but also with the City of Markham and York Region.”

While things are certainly starting to look up for the future, Lariviere knows he’s got a challenge ahead.

“We have to bring back our whole team,” he says. “And we’ll have to do some hiring and training.”

It’s true. While a small and dedicated team kept the lights on for the past 18 months, many of theatre’s employees were forced to find work elsewhere. Ushers, box office staff, front of house staff and backstage technicians all need to be found and brought up to speed for the reopening.

“Our key people are still in place,” Lariviere says. “They’re the foundation for us to rebuild around.”

If you’re interested in joining the team at the theatre, be sure to look out for postings.

Additionally, families and young people interested in the arts can look forward to the return of in-person performing arts camps at the theatre this coming summer.

It might be a little while until audiences can see the same number of shows as the theatre presented in 2019, but the plan to work back to that is well underway.

“Our hope is to rebuild our programs and partnerships carefully, making the reopening a sustainable operation and a success,’ Lariviere says. “It might take until 2024…but I hope I’m wrong. I hope it’s earlier.”

Of course, the best way to help bring a full season of shows back is to get out and see a show as soon as that ghost light finally gets put away this winter!

For more information, updates and tickets for shows at the Flato Markham Theatre, visit flatomarkhamtheatre.ca.