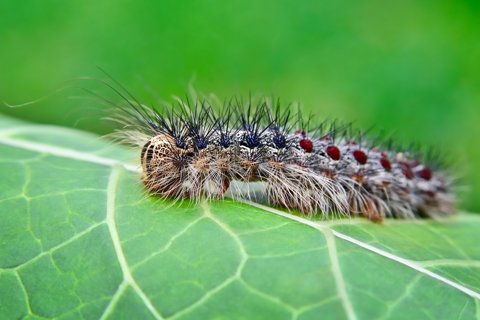 Trees in York Region are at risk of heavy to severe defoliation when LDD populations reach outbreak levels. Forested areas can be affected, but urban trees such as street trees and those on private property are at most risk.

Most healthy trees can withstand several years of severe defoliation. LDD caterpillars prefer oak tree leaves but will also eat other tree species including maple, elm, birch, poplar and willow trees. In some cases, they feed on evergreens including pine and spruce. In high numbers, LDD caterpillars can be a nuisance leaving droppings and bits of foliage on decks and walkways near infested trees.

Residents can take the actions below on trees at home to help control the impact of this invasive pest. Always remember to wear gloves when handling caterpillars to avoid an allergic reaction.

Caterpillars can be handpicked. Burlap, available at local hardware stores, can be placed on trees with string to trap the caterpillars making them easier to collect. Caterpillars can then be removed from the burlap and placed in a bucket of soapy water for a day or two then disposed of. If trees are severely infested, an insecticide may be considered a viable option. Homeowners should contact a licensed tree care company to discuss the best options.

As a preventative measure and part of its ongoing practice, York Region continues to monitor both street and forest tree plots at greatest risk.

In July, the region will be conducting defoliation surveys on previously surveyed plots to look at the actual defoliation levels (which the egg mass surveys in 2020 attempted to predict).  In late fall/early winter staff will be resurveying the plots for egg masses to help with 2022 LDD population predictions.