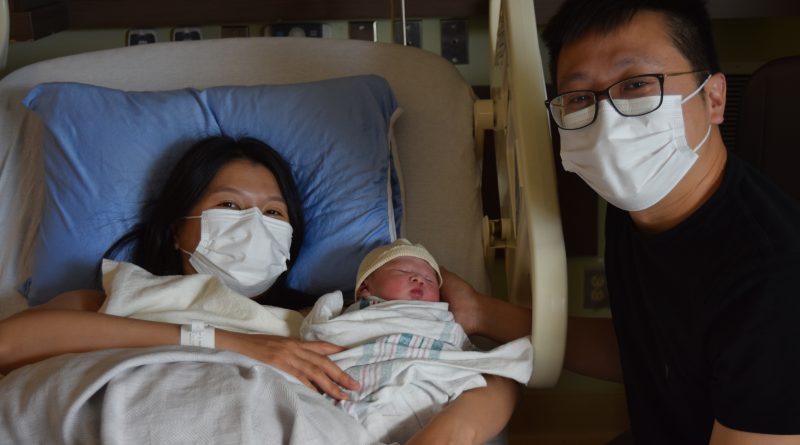 A relatively normal Thursday morning, the day started out like most others  for Cindy and Victor Lee.

Cindy was due to give birth to her second son in just over a week and was busy making preparations. Around noon, contractions started coming fast and furious.

Cindy made a call to The Stollery Family Centre for Childbirth & Children at Markham Stouffville Hospital (MSH) and was told to come to the hospital. Victor helped Cindy to the car and started the drive to the hospital where more than 3,500 babies are born each year.

It wasn’t long before Cindy was in full labour.

“She was screaming in the car,” Victor explained. “I was driving across 407 desperate to get us to the hospital safely but she was in so much pain.”

As they arrived at MSH, Cindy’s water broke. Victor pulled the car around the roundabout in front of the hospital and called Childbirth and Children’s Services (CCS) again. He was told to get her upstairs as quickly as possible.

In the meantime, the team of midwives and nurses came down from the fourth floor anticipating a possible early delivery.

Victor ran to get a wheelchair and yelled into the front reception, “my wife is giving birth – now!”

The reception staff immediately called an OBS alert and the CCS team sprung into action. Responding to OBS alerts is a skill that the team practices often to ensure they are ready for anything.

Victor had just managed to get Cindy into the wheelchair and hadn’t even reached the front door of MSH when Cindy gave birth. Midwives, nurses and doctors, who raced out to assist found Victor already holding his infant.

Baby and mom were quickly checked out by members of CCS and declared to be in good health. With the help of MSH staff, Victor got to cut the cord for his new son. Cheers rang through the parking lot and the front reception.

Victor and Cindy were brought up to their room by CCS team members including nurse Pam Ingley. She was just one of the members of the health care team who raced down to assist.

As Pam chatted with Victor she soon discovered she was the couple’s nurse at the birth of their older son Bryan, at a different hospital.

Cindy and Pam had a chuckle as they took turns explaining how Victor nearly fainted when Cindy got the epidural for the birth of Bryan three years ago.

“This time he caught the baby and cut the cord. It’s a big change.” Cindy said with a laugh.

Cindy and Victor are very appreciative of the incredible team at MSH who were so quickly able to help. They decided on the name Chace after their son’s adventurous birth.  It was on their list of names but little Chace’s surprise arrive sealed the deal.

The family returned to MSH a few days after Chace’s birth for follow-up through the CCS Mom and Baby Clinic where they were seen by Registered Midwife Stephanie Zaheer. Stephanie was happy to report that both mom and baby are doing well.