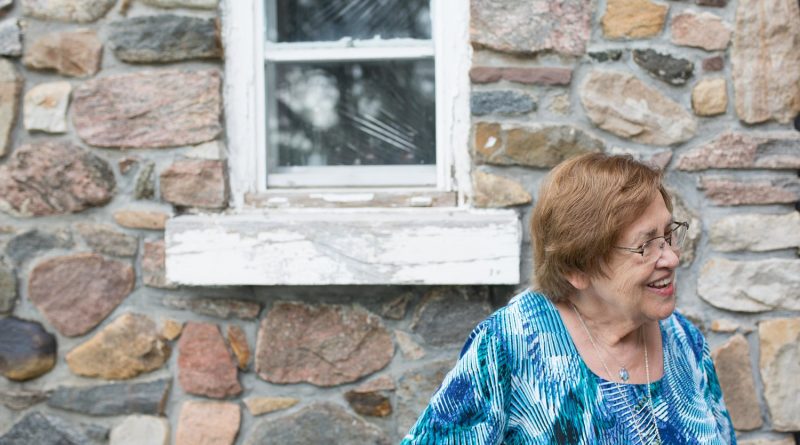 This month, he shares the following parts of a recorded conversation with Betty Wideman.

I grew up at Dixon Hill. That’s where the family farm was. Our farm was at 19th Ave. and Hwy #48. Just half-a-mile south of that, the next farm down, there’s a stone house on Hwy #48 that was my grandfather’s house. And before that, a small place had been built. As a little girl there was a small house behind the stone house that had a loft and there was a ladder to go up to the loft. It had been their original house. Sometime before I was born my great-grandfather was there. He was probably the first one there to farm that area.

I used to go down there because my uncle who was the youngest in the family was the one who inherited the farm after grandma and grandpa died. My uncle Wes and Aunt Agnes kept that little house that had the fireplace where they cooked and everything. We used it as a playhouse when I came along. We used to go down and play in there. After a while, they weren’t using it anymore, and then they took it down. We did a mixed farming thing at Dixon Hill.

So my (four) brothers and I all had to finish high school. But then the deal was you had to wait for five years, you had to work on the farm for five years. After five years if you could somehow get some money together you could go back to school and my brothers all did that. Now when I came along my brothers all went to bat for me and said, “Mother, let her go to Teacher’s College,” which is what normal schools were called in those days. They all went back to school because farming was very hard, very hard and not that rewarding to my brothers.

Now, all the boys on the farm next to us, they all stayed on the farm. They were great farmers. We weren’t good farmers.

My dad (born 1888) was ill. My dad had Parkinson’s disease from about the time he was twenty-nine years old. Apparently, it was precipitated by a fall from the barn when they were raising the barn. You know, they used to get together as a community and you’d raise a barn in a week or so. Everybody would work on the barn. And I understand from hearsay that my dad fell from a beam in the barn, and that was in 1919. He would have been around thirty.

After that, things weren’t just quite right. So they bought a car (a ’28 Chev or something), so my mom could drive down to the hospital in Toronto. For problems like that, you had to go into Toronto. She had to go to take dad to the hospital, Western hospital every three months or so. At that time, they did not have a name for Parkinson’s disease. I don’t think it was until the ‘50s before we knew dad had Parkinson’s disease.

Dad kept working as much as he could. He couldn’t really do things on his own, but he’d help. He did as much as he could on the farm. He was very limited as to what he could do. My brothers were all big guys. Two of them were well over two hundred pounds and the others were around two hundred pounds. They were tall—6’2’’ or 6’3”.  It was really hard slugging for the family; for my mom particularly who had to make decisions that my dad would normally have made in those days when it was more of a male-dominated time.

I went to a one-room country school with eight grades in one room. There were about forty or forty-five children with one teacher and eight grades. We didn’t have any Kindergarten. You started in grade one. The desks were small at the front of the room.

My one brother was in grade eight when I went to school. He had the job of walking me to and from school every day. We lived fairly close to the school so I had to go home at lunchtime. All the other kids could take their lunch, but we had to go home. I think I was bit of a pain for my big brother. However, he was only there for one year. He went off to high school after that.

I was expected to work out on the farm. We didn’t have any automated machinery at the time. You had a team of horses and a wagon. To do the haying, I was on the wagon driving the horses. My brothers had to use the pitchforks and toss the hay.

We had a row of eight or ten Maple trees and a lot of them are still there. We made our own Maple syrup on the farm. We got the honey from my uncle’s beehives.

One of the big things for us was that we had a swimming hole on our farm. We didn’t have any indoor plumbing or bathrooms, so after you got hot and bothered during the daytime, you took your keg of soap and washed up in the swimming hole. It was part of the Rouge River. It was deep enough that I learned to dog paddle in it.

My uncle kept bees on our farm. Before they had me working on the farm, up until about eleven or twelve I guess, my cousin Carl and I played down at the creek all of the time. We found a place further down the creek where it was all clay. We would model things out of the clay and bake them. We just had a great time.