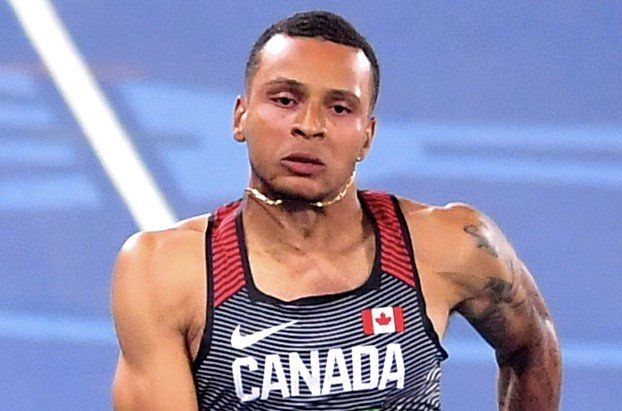 Hometown hero Andre De Grasse is now the most decorated male Olympian in Canadian history after anchoring Team Canada to a third-place finish in the men’s 4×100-metre relay at the Tokyo Olympics on August 6.

That marked the first time since Amsterdam 1928 that Team Canada won gold in the 200m sprint and since Atlanta 1996 for a gold medal in sprinting. To celebrate the historic moment, the City of Markham proclaimed August 4 ‘Andre De Grasse Day’ and lit the gateway sign at Steeles Avenue and Markham Road in gold.

“On behalf of Members of Council and the entire community, we send our congratulations to Andre for these outstanding accomplishments and thank him for representing Markham and Canada with pride,” Mayor Frank Scarpitti says.

De Grasse has won a medal in every Olympic race in which he has competed. He made history at his Olympics debut at the Rio 2016 Olympic Games by becoming the only Canadian to win medals in all three sprint events at a single Games. To celebrate his accomplishments there, the City of Markham dedicated Andre De Grasse Street to the sprinter in 2018. He’s also featured at the Markham Pan Am Centre as part of a series of 12 paintings of top local athletes, created in collaboration with students at Bill Crothers Secondary School, Markham’s athletic-based high school.

Once a promising basketball player, he was convinced by a friend to give track a try when his high school was unable to field a basketball team in his senior year. “De Grasse laced up a pair of borrowed spikes, donned some baggy basketball shorts and raced to a second place finish at the York Region Championships without the benefit of starting blocks,” his official website says. Tony Sharpe, himself an Olympic medalist for Canada at the 1984 Olympics, was in the stands that day in 2012 and immediately took De Grasse under his wing. By the next summer, De Grasse had set a new Canadian junior record of 10.25 in the 100m.

You’re invited to share messages of congratulations for De Grasse at markham.ca/AndreDeGrasse until August 30.