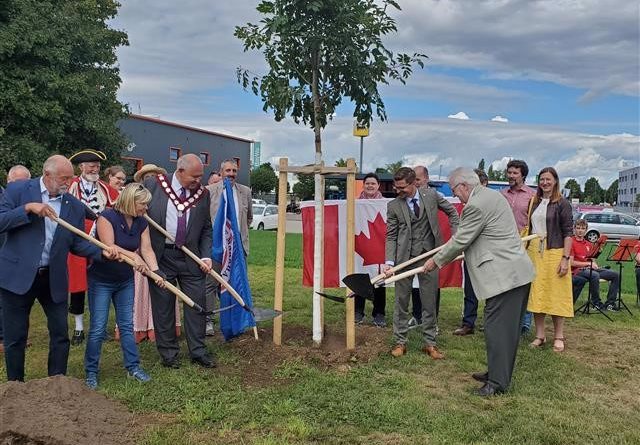 The City of Markham celebrated the 20th anniversary of its city-to-city partnership with its Sister City, one of the only remaining walled medieval towns in Germany.

“We are extremely honoured by this tribute,” Mayor Frank Scarpitti said of the celebration at Stadtmauerfest, Nördlingen’s Historic Wall Festival. He recently attended the 2021 anniversary celebration with Ward 4 Councillor Karen Rea and Markham delegates and presented Nördlingen Mayor David Wittner with a 20-Year Partnership Anniversary Certificate.

“Over the last 20 years, due in part to our shared historical roots, the partnership and friendship between our cities has grown,” said Wittner. “It is my wish that we continue to expand and strengthen our bond – in particular to engage the youth of Nördlingen and Markham.”

The partnership has provided many opportunities for cultural and student exchanges and learning opportunities between the two cities. In 2013, ‘Markham Street’ was unveiled in Nördlingen and in 2017, Markham dedicated the William Berczy statue to commemorate Canada’s 150th birthday.

Berczy was born in Bavaria (now Germany in 1744). In 1792, in partnership with British land speculators, Berczy, his wife and nearly 200 German settlers left Europe to develop a tract of land in western New York, the federal government reports. When that effort failed, he led the settlers to Upper Canada, where Lieut.-Gov. John Graves Simcoe offered them land in return for construction work in the early town of York. The settlers constructed a section of Yonge Street, a military and commercial artery, and settled in what is now Markham.

Markham recognizes the Markham Berczy Settlers Association, Markham Historical Society and Friends of Markham based in Nördlingen for their “dedication and extraordinary volunteerism” and efforts towards strengthening the relationship with Nördlingen, which is located 130 kilometres northwest of Munich.

The photo album, History of the Nördlingen-Markham city-to-city partnership, showcases some of the exchanges between the two cities and was created and gifted to Markham in 2013 by Aksel Rinck. To commemorate the 20th anniversary of the partnership, the album was digitized and can be viewed at YourVoiceMarkham.ca/Nordlingen. Rinck passed away in Nördlingen on September 10 at the age of 100. Scarpitti led a moment of silence on September 12 at the Development Services Committee meeting to honour his memory.

Photo of Markham Mayor Frank Scarpitti and Ward 4 Councillor Karen Rea at a tree planting ceremony with Nördlingen Mayor David Wittner and delegates courtesy of the City of Markham.