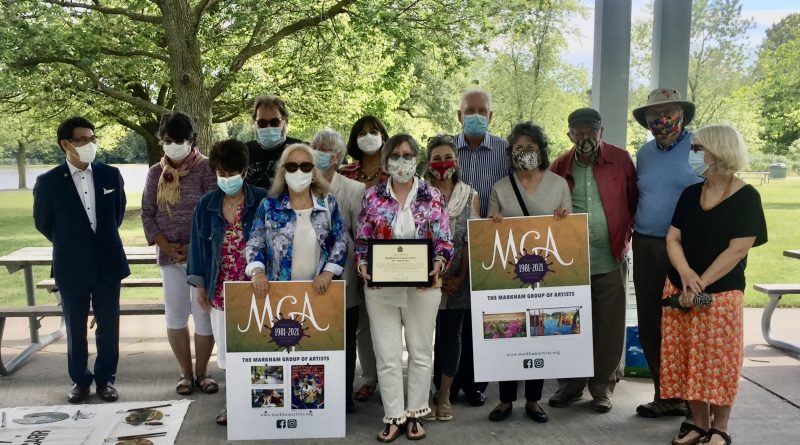 Since 1981, The Markham Group of Artists has been working to build community for those who make and create art in Markham. Finally incorporating in 2012, the group (or MGA as they are called) includes beginners, professionals, and artists at all stages in between.

Now 70 members strong, they welcome all visual artists and include work in a variety of media styles.

After a long year and a half, somewhat sequestered from each other, the MGA is starting it’s season off with a juried show called Windows Open 2021. The show is roughly themed around the idea that perhaps we can finally throw open our windows again and welcome ourselves back to community.

“We were able to deal with the isolation by exploring and expressing our feelings through our art,” explains Carmela Casuccio, MGA Vice President and Show Director for Windows Open. “What we missed was the inspiration, critiques and conversation we’ve always had from other artists.”

The MGA has been determined to fill this gap as well and as safely as possible for their members throughout the pandemic. Most of the group’s programs have been done virtually since April 2020.

Monthly meetings, which each feature a painting demonstration or artist talk by experts in various fields, have been taking place on the Zoom platform. Their bi-weekly peer critique meetings, a chance to have other artists view member’s work and offer feedback, went digital as well.

The group feels like it’s time to get out in the world, at least a bit, again.

“We wanted to bring awareness of Markham and the Markham Group of Artists to a wider audience,” says Casuccio. “We also wanted to offer the opportunity to display their work to non-members artists who have been cut off from their peers and art collectors for so long.”

In this spirit, the show was opened to all artists from Toronto and surrounding areas; to members and non-members of the MGA alike.

The show itself can be visited and viewed at https://markhamartists.org, from September 18 through October 30. The show will feature all the accepted paintings as well as the prize winners. There will be additional comments about the prize winning pieces by the show’s juror, Joanne Poluch.

“We’re honoured to have noted Art Consultant Joanne Poluch of Remarque Art Consulting in Guelph as our juror,” says Casucciuo.

Poluch will determine which work the cash prizes will go to, but all the pieces are available to purchase through the artists.

“We are expecting to see an exciting show of original art to inspire our audience to feel and look at the world through artists’ eyes,” says Casuccio.

As submissions for Windows Open began this past September, the group was welcomed back to the community by Markham’s Mayor, Frank Scarpitti and the Markham City Council. The city made a proclamation, naming a week to mark the group’s 40th anniversary.

“Art shows and art groups are important to bring a sense of community to places like Markham to help residents feel connected to their neighbours and learn more about them,” says Casuccio. “We are lucky to live in such a diverse city that has so much to offer.”