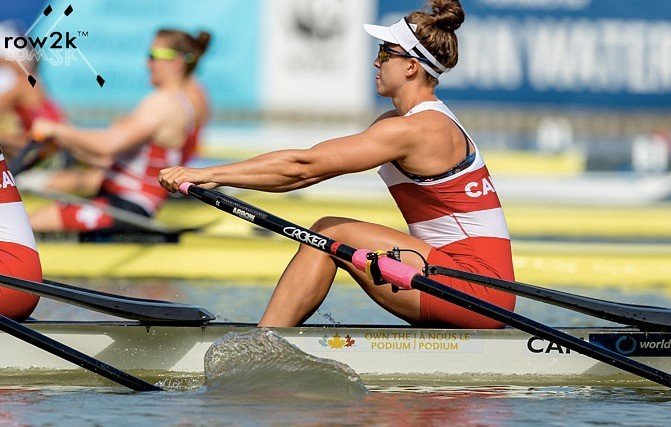 Smith and Sevick became the first Canadian duo in 25 years to qualify for the finals in the women’s double sculls at the Olympics, rowing their way to a sixth-place finish.

The last time a Canadian female pair qualified in the double sculls event was at the Atlanta Olympics in 1996- two years after Smith was born. In those Games, Canadians Marnie McBean and Kathleen Heddle would go on to win the gold medal.

Smith and her partner had an off start at their first heat in Tokyo, but quickly powered through the 1,000 km Sea Forest Waterway at an astonishing 38 strokes per minute, finishing second and heading straight to the semi-finals.

The Canadian duo placed second again, pushing through to the finals using an increased rate of 39 strokes per minute, and rowing at approximately 17 kilometres per minute throughout the heat.

In their nail-biting final race, they capped off an impressive Summer Games performance by finishing sixth among 13 rowing teams.

As an anaerobic athlete, Smith prefers a strong and powerful start, and she sits in the bow of the boat, providing that power and making calls for the duo. Her incredible focus and passion for the sport have been part of her since she first started rowing at the age of 18 when discovered at her lifeguarding job at Toronto’s Cherry Beach.

She kept up a vigorous training schedule while simultaneously completely her Bachelor of Science in Life Sciences (Cellular Biology) at McGill University in Quebec, before moving to Victoria British Columbia and rowing full-time with Rowing Canada Aviron.

Smith’s hard work and determination also helped her get healthy enough in 2014 after suffering three fractured ribs to compete in the World Championships, World Cup events, and Olympic qualifications and performances.

Post-Olympics, Smith will return to academia and start a Master’s Degree in Water Science, Policy and Management across the pond, at Oxford University in England.

The Markham rower is an incredibly hard-working, dedicated, and intelligent athlete, with a philanthropic and generous spirit. Her wicked sense of humour and infectious smile make her well-liked by everyone she meets, and her resilience, kindness and drive inspire others.

When asked about what she will always remember from her Olympic journey, she reflected on the strange circumstances of Tokyo 2020 and the lack of fellow Canadians in the stands. However, the incredible support and well wishes she received from friends, family, and fans is something she will never forget.

“Knowing how many people from home were watching and wishing me the best was huge!,” she said.

Her performance representing Canada at Tokyo 2020 was incredible to watch, and Markham, and the rest of Canada, could not be prouder.