Wander around the City of Markham and you just might come across Olympic athlete Andre De Grasse, ‘Canada’s Queen of R & B Soul’ Jully Black or even Markham founder William Berczy.

“In celebration of our 50th anniversary since incorporation, the City of Markham is proud to celebrate people and places that have put our city on the map,” Mayor Frank Scarpitti says of the street banners highlighting significant people and places in the community’s past and present.

“Key figures in our city’s history, athletes, entertainers and business leaders that have represented our country on the global stage and photos of municipal landmarks that bring about civic pride will line our historic main streets in recognition of this milestone anniversary.”

Those key figures include Mary Anne Chambers (recipient of the Governor General of Canada’s Meritorious Service Medal), Bill Crothers (who competed in the Olympics in 1964 and 1968), Phylicia George (a dual season Olympian who competed in track and field in 2014 and 2016 and in bobsledding in 2018) and Michelle Li (2014 Commonwealth Games badminton champion). 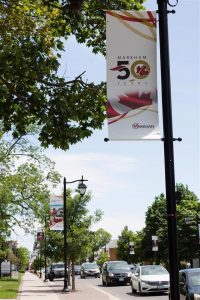 Another banner will acknowledge William Markham. He was the Archbishop of York when his friend John Graves Simcoe – the first Lieutenant-Governor of Upper Canada – named the Township in his honour.

Each of the 21 designs will include a photograph or drawing, the name of the place or person featured, some quick facts, and the commemorative colours of red, black and gold. These will accompany a special commemorative Markham 50th anniversary banner.

The roots of the current The Corporation of City of Markham date back to the creation of the Regional Municipality of York on January 1, 1971. That’s when Unionville, Milliken, Thornhill and Markham Village were consolidated to form the Town of Markham.

Celebrations for the 50th anniversary of Markham’s incorporation will revolve around the theme “50 Years of Excellence.”

Residents will be invited to take part in activities that feature themes and transformational moments in the community’s journey from a town into a modern city, and social media showcasing Markham’s achievements, history, diversity and community.

Learn more at markham.ca/Markham50 and join the festivities by using #Markham50 on social media.