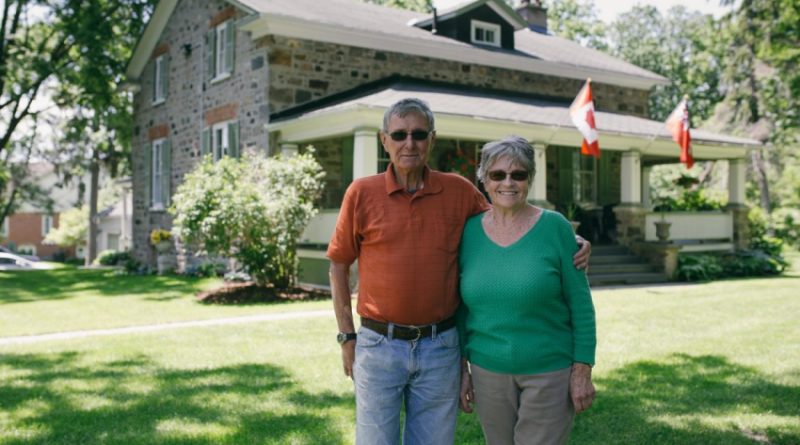 This month, he shares the following parts of a recorded conversation with Dave and Linaire Armstrong.

Linaire: Captain Armstrong, the eldest in the family, came from Northumberland (Cumberland). He came in the 1800’s, around 1819 via New York and his family followed shortly afterwards. They sojourned in Montreal and that’s where the father, William Thomas, contracted an illnesses and he’s buried in Montreal. The Captain was married in 1833, to Esther Ressor. Many of his descendants are in Locust Hill.

Dave: My great-grand father, the Captain operated a distillery and the farm. The still was in the Wellington Way Hotel. The original Anglican Church sat where the Starbucks is and the Armstrong’s donated the windows. Now the Church is up on the Parkway. The windows he donated are still there.

Linaire: Captain Armstrong also donated the land from his farm to the Church. His land stretched from highway 48 to 9th line, 300 acres and then down (Dave adds) 160 rods (to just north of the 407).

Dave: He was also a captain in the local militia. They had a firing range down in the valley here on the farm, a shooting range. They used to go down there on Sunday mornings and practice.

Dave: My grand-dad was a vet. He went to the University of Guelph and got his degree in Veterinary Medicine and practiced here. He was quite a fisherman, he loved fishing. They used a copper line to fish. He loved to go up to Haliburton to a lake called Clear lake and fish up there. He would go for a week because of the travel time it took to get up there. I remember his rocking chair and him always smoking his pipe. But he was a very quiet and very tall man.

Linaire: He was the youngest son of Captain Armstrong.

Dave: My grandfather lived in the house with us. When he died (I was six), I remember them carrying him downstairs. They’re all buried up here in this first cemetery, which is off this farm too.

Dave: On the farm we had dairy cattle, pigs and 12 teams of Clydesdale’s to work the farm. Before my dad took over in 1942 or ‘3, fattening cattle, the beef cattle (Heifers, short-horned) came from the west.

In those days they probably didn’t have many slaughter houses out there and didn’t have the refrigeration to transport the carcasses down here. So you better transport them alive and then bang them on the head down here. A cowboy would ride with the cattle in the cattle-cars, clean them, eat with them, sleep with them. But when they arrived at Markham Train station after trip from out west, they had lost weight. So before they sent the Heifers to market, they would run them down Main Street right here to the barn where we would fatten them up for a while before taking them to market.

We had lots of dogs. We used to have some Beagles, and Black-and-Tanned Hounds. And then we got into Springer’s. We’ve got one now. We named the dogs ‘Mark,’ after Markham.

Line fences were always a problem. If someone’s livestock got out and into someone else’s crop—there’s Clover in May or June, it gives off a gas to cattle that eat it and they bloat. Then you have to go out, stick a needle for inflating a football between their ribs and let the gas out, or else they’ll die. Our neighbors were the Penny’s. We always made sure we built a new line fence for the Penny’s. Their farm has now become part of the 407. Our farm was sold in about 1965.

Dave: The best way I can explain what has been lost and retained from the past, is, I don’t know the neighbour who is living on the street down here, but I know Harry Lewis and Donny Miller who live seven miles away from here, and Ashmore Reesor who lives two miles away from here. We see them often. It’s nice to be able to drive into Donny Miller’s and talk to him, have a coffee. It could be a month between visits, but it seems like it was just like yesterday.