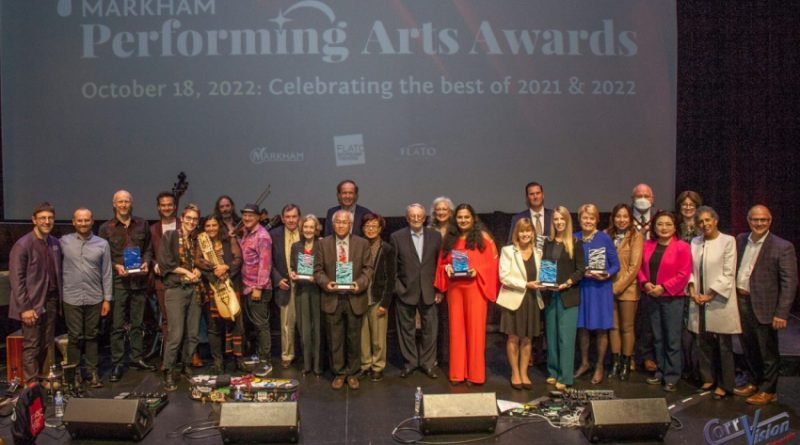 2021 Professional Artist of the Year: For more than a decade, Sultans of String have thrilled audiences with their genre-hopping passport of Celtic reels, Flamenco, Django-jazz, Arabic, Cuban and South Asian rhythms. Sultans of String celebrates musical fusion and human creativity with warmth and virtuosity, bringing audiences all over the world to their feet. This multi-award-winning, three-time Juno-nominated band creates soulful and energetic music and frequently shares the stage with other talented Canadian artists that complement their global dynamism and flair.

2022 Professional Artist of the Year: Born and bred in Germany, Michael Kaeshammer began performing club, theatre, and festival stages throughout Europe in his early teens and continued that path after emigrating to Canada with his family in the mid-90s. Over the course of decades, he grew from child prodigy to unparalleled pianist and virtuosic songwriter, developing a style that weaves threads of classical, jazz, blues, boogie-woogie, stride, and even pop into a signature and sought-after sonic tapestry. For the acclaimed Canadian pianist and singer, there is no set destination, no achievable endpoint on his path; it is about the journey itself, and that journey will always be ongoing.

2021 Community Group/Artist of the Year: Markham Arts Council was first incorporated in 2004 with a focus on connecting local artists and promoting the various diverse forms of art. It was founded to help the local under-served artists and arts organizations to come together, network, share their resources and grow. Over the past sixteen years, the arts council has played a leadership role in the community, providing quality programming and services such as the Art for Seniors Visual and Performing Arts Programs, Community Art Wall, Arts and Cultural Heritage Celebrations, Culture Days celebrations, Walk with Art, Funders’ In, Educational Webinars, Artist Unplugged Series, Heritage Walks documentaries, and many other tools and forums for professional development and community networking.

2022 Community Group/Artist of the Year: Jo-Ann Bryson-Ko has been sharing her love of dance with students of all levels and ages for many years. Kicks Dance Studio has operated since 1984 and was recently presented with the Lifetime Achievement Award for 35 years as a member of the British Association of Teachers of Dancing. She has trained many students who are now enjoying professional careers in dance, television, and film, some even making it to major roles in Broadway musicals.

2021 Partner of the Year: Today Commercial News, formerly named Today Daily News, started as a Chinese daily newspaper in 2005 and has since become a free weekly newspaper published every Friday. Today Commercial News seeks to inform, engage, and empower the communities of Toronto and the Greater Toronto Area, giving up-to-date coverage of people and events, both at home and abroad.

2022 Partner of the Year: Durham Radio is a leading independent Ontario-based media company established in 1994 by Robert Marshall and Douglas Kirk, an English teacher and research analyst. The company’s priority is to produce good quality, locally focused radio with a strong commitment to the communities they serve.

2021 Ambassador of the Year: Justin Reid is a geologist and capital markets executive with over 20 years of experience focused exclusively on the mineral resource space. Currently, he is the CEO of Troilus Gold focused on the development of one of Canada’s largest gold and copper mines in Northern Quebec, as well has served on the Advisory Board at Flato Markham Theatre since 2015.

2022 Ambassador of the Year: Judi McIntyre has spent over four decades volunteering and dedicating her time within the community serving as a board member for organizations such as the Markham Theatre, Markham Village Musical Festival, and the Markham Arts Council. She is the founder of the Milliken Children’s Festival and the Markham Farmers’ Market. Starting her community involvement in 1985 with the Markham Concert Band holding various positions on the board of directors, she has also been the recipient of many awards over the years such as the 1997 Achievement & Civic Recognition Award from the Town of Markham, 1999-2000 Volunteer of the Year Award with the Markham Board of Trade, 2012s Queen’s Diamond Jubilee Recipient and 2018s City of Markham Meritorious Seniors Award.