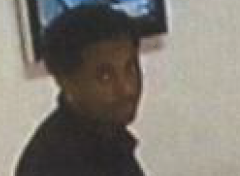 Police have charged a 47-year-old Richmond Hill man and are appealing for help in finding several other suspects after hazardous material was found in a local hotel room, forcing the evacuation of several rooms.

Avraham Bistritzer has been charged with mischief endangering life. Police have issued a warrant for the arrest of Shai Shimon Alfassi, 42, of Vaughan and have released images of two other male suspects. The first has black hair and was wearing a blue shirt and blue jeans. The second was wearing a brown leather jacket and white baseball hat.

“Possession of dangerous chemicals can pose serious risks, including fires and explosions,” says Const. Laura Nicolle. You’re asked to report any suspicious activity, chemical odours, unusual storage or stockpiling of chemicals. If you come across suspicious materials, never drink, eat, touch or inhale materials that are believed to be hazardous chemicals.

“Even slightly inhaling a chemical can cause serious injury,” Nicolle says. If a material is suspected hazardous, evacuate the area immediately and call 9-1-1. Do not approach the suspects. Anyone with information regarding the investigation is asked to contact #5 District Criminal Investigations Bureau at 1-866-876-5423, ext. 7541. Or, call Crime Stoppers at 1-800-222-tips or leave an anonymous tip online at www.1800222tips.com.