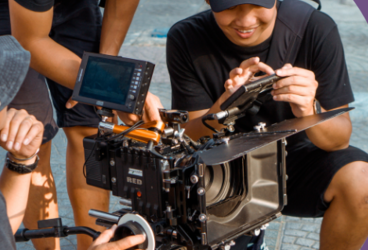 Digital Media Artists are increasingly forced to manage their own careers, lacking both industry and business acumen, and the awareness of available external resources.

Artrepreneur provides access to education in an environment where creatives can learn alongside other creatives, encouraging collaboration, improving their efficiency and effectiveness as both artists and business people, resulting in a more significant socio-economic impact.

Removing the barriers to access, offering program bursaries, and prioritizing BIPOC and LGBTQ+ artists, has been at the core of the program fellowship. To this landmark program, 20 fellows of which 80 per cent identify with priority groups have been accepted— welcoming York Region artists such as Documentary Filmmaker Bindhu Shah (Richmond Hill), Producer Christine Wu (Stouffville), 3D Animator Leslie Luxemburger (Newmarket), Cinematographer Pau Martin del Fresno (Vaughan), Director Trina Skanthavarathan (Markham), amongst others.

Through a new partnership with the Canadian Media Producers Association, Artrepreneur has launched the inaugural CMPA Pitch Competition.

With the launch of this unique program in our region, the group has announced the inaugural CMPA Pitch Competition presented through a new partnership with the Canadian Media Producers Association.

The CMPA has been actively investing in mentorship programs to fuel and foster the careers of Canada’s next generation of independent producers. The group’s commitment is to eliminate the barriers that prevent access to equal training and opportunity, elevate underrepresented voices, and build a stronger future for Canada’s media production industry.

The CMPA Pitch competition will be the culminating event in the Artrepreneur Digital Media Program. Throughout the course, each fellow will work towards developing a project and corresponding pitch to be presented during the two-day pitch competition to a jury of industry professionals.

The winning pitch will be announced at the graduation ceremony in May, and receive a monetary prize. Both the jury and the prize-presentation will be led by the CMPA.

Throughout the pandemic, the Artrepreneur program has proven invaluable to the sustainability of our communities. With the growing demand for cultural and creative consumption and the critical need for economic support and resilience amongst local artists, Artrepreneur created a new series of virtual-learning courses specialized in capacity-building for the Performing Arts, Visual Arts and Digital Media sectors.

For more information about the program and the full roster of curriculum facilitators, visit www.yorkregionartscouncil.com/digitalmedia.