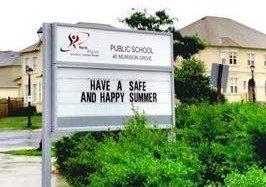 Just days after many Canadians chose not to celebrate Canada Day following the discovery of unmarked graves at residential schools, the York Region District School Board has decided to rename Sir John A. Macdonald Public School.

“Reviewing the names of our schools is an important part of our commitment to creating safe, welcoming and inclusive learning spaces for all of our students,” Board Chair Cynthia Cordova said of the decision reached by trustees at a special board meeting on July 6.

The Board has already removed the name of Canada’s first prime minister from the building and signage at the Markham school, which opened its doors in 2012. “Students, staff and families at this school can feel proud of being a part of this ongoing learning and part of a school community committed to equity, inclusivity and Truth and Reconciliation,” Cordova says.

Macdonald is considered an architect of the residential school system that took Indigenous children from their families in a bid to assimilate them, the Board explains in a report. He created policies to starve Indigenous peoples and to remove them from their homes on the plains to allow for railroads and settlement of non-Indigenous people. He also denied citizenship to Chinese immigrants and supported legislation that would exclude them from voting until 1946.

The Board will begin the process of renaming the school in the fall and promises to consult with the Chippewas of Georgina Island and local school community. “As a school board committed to Truth and Reconciliation, it is essential that we engage in learning, listen to Indigenous voices and take the right steps in response to that learning,” says Director of Education Louise Sirisko. “We also have a responsibility as an educational organization to model what it means to listen, learn and take action to create a better future.”

Macdonald’s likeness has been removed from various public spaces over the last year and in June, the statue of Egerton Ryerson, a fellow architect of residential schools, was toppled outside the Toronto university that bears his name following the discovery of a mass grave of Indigenous children at a school.

Photo of Sir John. A. Macdonald Public School following the removal of the first prime minister’s name from signage courtesy of the York Region District School Board.

One thought on “Sir John A. Macdonald’s name removed from school”