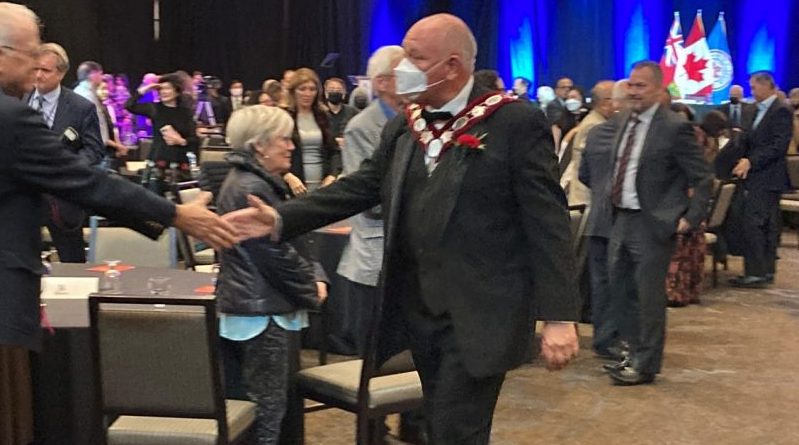 Markham’s Mayor and Council members took their oaths of office at the November 15 Inaugural Meeting of Markham’s Council for the 2022 to 2026 term. While optimism was expressed about the city’s future, many also acknowledged the challenges ahead.

Relatives, friends, dignitaries, Markham management and staff, and other invitees gathered to celebrate the evening at the Hilton Toronto/Markham Suites.

Council members expressed an overriding sentiment of gratitude for the support received throughout their campaigns, a shared pride in Markham and accomplishments in the last term, and a recognition of the need to work together.

“Great communities do not occur by accident. They require effort on the part of all of us to make them that way. It’s true that engaged citizens working together can accomplish extraordinary things, and the tasks before us are many, and some are great,” said Ward 1 Councillor Keith Irish.

Mayor Frank Scarpitti acknowledged the “profound impact” of COVID-19 and thanked residents for coming together to support front-line workers, meet masking requirements, and collect and distribute personal protective equipment (PPE). He also acknowledged the community’s resolve “despite the isolation and disconnection in the midst of incredible uncertainty.”

Although the pandemic impacted a significant portion of the 2018-2022 term, Scarpitti shared that council and staff accomplished most of the goals outlined in the city’s strategic plan.

He also shared successes, including Markham having the lowest 17-year average property tax increase in the GTA and the lowest tax rates in almost all building categories. Sustainability, diversity, fiscal responsibility, a commitment to truth and reconciliation, and “transformational” building projects, including the York University Markham Campus set to open in 2024 and the Yonge North subway extension, were also mentioned.

Revitalization of Main Street Unionville and Victoria Square Boulevard, infrastructure improvements such as traffic alleviating bridges over Highway 404 and a flood mitigation program for high-risk areas, fire and emergency services modernization, a new Civic Square in Markham Centre, continuing expansion of the Markham Centre Trail System, and the Markham Innovation Exchange, also referred to as “MarkhamMix” – a proposed 1900 acre technology park, were among the exciting projects on the horizon shared by Scarpitti.

“(MarkhamMix) will be an engine for innovation that will drive Canada’s economy. A place for inventing, commercializing, and manufacturing the next generation of new technologies,” he said, adding that “Markham’s success has been our ability to attract highly skilled talent. Well, talent only comes to your community when they see opportunities. The Mix will be the door to those opportunities.”

“I am as inspired and energized today to make a difference as I was 34 years ago,” shared Regional Councillor and long-serving politician Jim Jones.

A sports and entertainment complex in Markham Centre, the burying of high-voltage transmission lines to free up land for potential industrial development along the Highway 407 corridor, and a GTA cross-town railway line connecting Oshawa to Hamilton are among his visions for the future.

Though not marred, the evening’s optimism about the future was met with an equal sense of caution about challenges ahead and improvements that need to happen.

Regional Councillor and Deputy Mayor Michael Chan spoke about the need to increase efficiency and reduce red tape and the time it takes to get things done.

“Strengthening efficiency can save resources which we can (use for) other government priorities, and at the end of the day, serve the people of Markham better,” he said.

Regional Councillor Jones shared ideas to improve sustainability, such as converting waste to energy, vertical farming, and reducing reliance on the automobile.

“This term is going to be challenging,” said Ward 4 Councillor Karen Rea. “We have a housing affordability crisis, and just building more units will not solve the affordability issue. We need to encourage more purpose-built rental units that can accommodate our youth, our seniors and more vulnerable, and those that are on a fixed income.”

She added that her efforts to diversify housing stock to include duplexes, triplexes, and low-rise apartment buildings, will continue so that residents have a broader and more affordable choice of housing types.

Ward 1 Councillor Keith Irish and Ward 3 Councillor Reid McAlpine, addressed the need for responsible growth. Councillor McAlpine who could not attend the event but shared some words by video.

“Markham, in general, and Ward 3, in particular, are under enormous pressure to grow. For those who have lived here for decades, it may not be what we bought into forty years ago, or even only twenty years ago, yet simply saying ‘no’ is not an option,” he said. “You may recall recently announced federal plans to increase immigration to over 500,000 people a year. Markham must do its part to help new Canadians as well as those migrating from smaller centres across the country.”

“Unbridled intensification is not the answer. We must sensibly manage growth to ensure it respects the needs of both current and future residents as well as our natural environment while providing adequate greenspace that effectively contributes to an enviable quality of life,” said Councillor Irish.

Councillor Irish went on to encourage the community to look beyond Markham’s borders. “We cannot work in isolation and ignore the broader backdrop of the times in which we live as we confront the lasting impacts of the pandemic, as well as economic uncertainly, civil unrest, climate change, and geopolitical conflict,” he said, adding that “we are all responsible for the tone and temper of our discourse in our national life and it begins here. And only by working together can we make it better.”

Also acknowledged during the event were former Regional Councillor Jack Heath and former Ward 7 Councillor Khalid Usman, who retired at the end of the last term. Both were thanked for their several years of public service.

Photo: Mayor Frank Scarpitti is congratulated after he takes the oath of office along with other council members at the Inaugural Meeting of the 2022 to 2026 Markham Council.