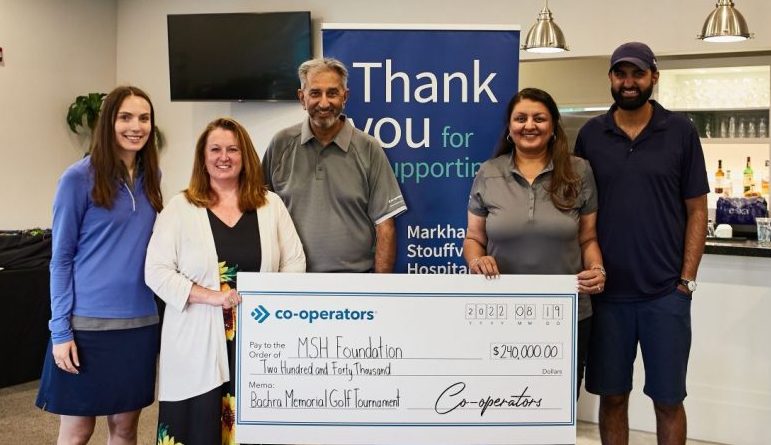 Most people don’t know that the government doesn’t cover the cost of the equipment they see when they go to Markham Stouffville Hospital (MSH).

Bill Bachra, chair of the Markham Stouffville Hospital Foundation (MSHF) board of directors, wants everyone to know this. “We have to educate people as to why they need to donate – a lot don’t know,” he said.

According to Suzette Strong, CEO of MSHF, costs covered by the government are essentially for the “bricks and mortar” and operating expenses – mainly the salaries of the doctors, nurses, and other hospital staff.

Covering the cost of most healthcare capital needs, including equipment – from scopes to MRI machines – relies on fundraising.

For a hospital like MSH, the equipment list is a long one. Not only is replacing “aged and overused” equipment necessary, but more is needed as the hospital grows.

“So, it’s not just to replace old stuff, it’s to expand the ability to serve our community,” explained Strong.

Strong explained how the hospital creates a wish list of its most urgent capital funding needs each year, costing approximately $20 million. The foundation covers roughly $8 to $10 million of that total.

MSH must then prioritize how they’re going to spend the money raised and rank and rate the urgency of the pieces of equipment on its list.

“The needs of the hospital outweigh our ability, despite how generous our community is – despite amazing tournaments like the Bachra Memorial.”

The “Bachra Memorial” Strong is referring to is the golf tournament Bachra and his children started last year as a fundraiser for MSHF.

The goal for last year’s tournament was to purchase two intensive care unit (ICU) beds at $50,000 each. The event raised $225,000, enabling the purchase of four ICU beds.

This year’s tournament goal is to purchase a new ultrasound machine, valued at about $220,000.

An ultrasound machine, explained Strong, is a critical diagnostic tool without which “you can’t prescribe a treatment plan or properly diagnose a health issue,” adding that “we fund it 100 per cent.”

At the Aug. 19 tournament dinner, Bachra’s son Amrithal explained how he, his fiancée Kristen, and his father, came up with the idea of the tournament as a way to focus their energy while stuck at home during the COVID-19 pandemic. They held the first Bachra Memorial Golf Tournament in 2021.

What perhaps started as a fun COVID-19 distraction has a far deeper meaning for the Bachra family. Their true inspiration was honouring Bill’s parents’ memory, who both received care from MSH.

Bachra told tournament guests that during the August 2003 power blackout, when his mother relied on an oxygen machine to live, MSH supplied them with portable oxygen machines.

“I want to remind everyone that the government does not fund the hospital’s medical equipment. Someone had made donations to the hospital, and that saved my mom’s life,” adding, “I encourage you all to support the hospital in any way you can, and you can help save lives.”

For Bachra, it’s also about leading by example for his family and community.

Bachra explained the importance of instilling in his children the knowledge that a hospital relies on fundraising. “Now I’ve got my son involved – I want him to understand that if and when he has kids, if the hospital doesn’t have the right equipment, then it will affect (his family).”

Strong refers to Bachra as “someone who genuinely leads by example.

“I know that’s a phrase that people throw around now, but he is incredibly humble and genuinely philanthropic. And he’s passing on the torch to his kids,” Strong said.

“In fundraising, what inspires us over and over is when we see it through the generations,” she added.

A surprise unveiling of a plaque in the name of The Bachra Memorial Golf Tournament was held for Bachra and his family at the dinner. The plaque will be hung in MSH’s critical care and ICU family waiting room.

In terms of leading by example in the community, Bachra’s approach to his volunteer chair role is far from symbolic. He truly “walks the talk.”

In itself, the Bachra Memorial Tournament is a key fundraising event for MSHF. In addition, Bill and Manjit Bachra and family made a personal donation of $250,000 to the hospital. An unveiling of a dedication sign for an ultrasound room in the MSH diagnostic imaging department to acknowledge their generosity took place Aug. 18.

Bachra was called a “superhero” for his impactful fundraising efforts by a colleague who spoke at the event. MSHF sees immense value in every single donation, regardless of its size.

“Our community is incredibly generous,” said Strong, adding that its fundraising support meets many of the hospital’s needs. The COVID-19 pandemic strengthened that generosity.

Though difficult to say anything positive about the pandemic, the silver lining for Strong was that “it really heightened peoples’ awareness of the important and critical role that hospitals play.

“So that awareness was a benefit to our fundraising efforts,” she said.

For Strong, Bachra, and the entire MSHF team, the challenge ahead is to build on that momentum by continuing to engage and educate the community that only with its help will MSH have the money it requires to grow and effectively support the healthcare needs of its residents.

Visit mshf.on.ca for information on how you can help.