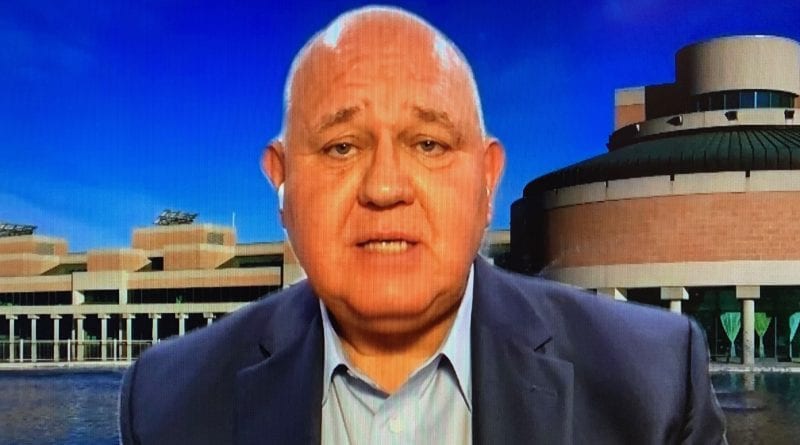 The Mayor introduced the gathering by recognizing the work of all involved in the success of the video conferences and thanked everyone who had submitted questions. He reported that to date there were 399 reported Covid-19 cases in Markham and that 42 people had passed away.

Gratitude was expressed to health care and front-line workers, to the provincial government for both a plan to reopen the economy and readiness for a third wave of the pandemic. Scarpitti said, “We have one of the lowest community-spreads in comparison to Toronto, other municipalities in the GTA and the provincial average.”

Wai acknowledged that there was a new normal on the horizon for Ontario, that collaboration was crucial, and asked Calandra, “what is your business plan?”

Calandra explained that the transition to bring the economy up to speed will be gradual. “The first priority is health care. Currently, the rate of infection is declining because people are following the rules. We will open the economy by sector as long as the curve is kept low.”

Scarpitti read questions that had been submitted to his office. In reply to a question about uneven access to PPE (Personal Protective Equipment) above all for small businesses, Calandra explained that the federal government is focussing on financial support for small businesses, that the province is focussing on health care and responding to their needs for PPE—dentists, doctors, long term care homes. “There must be enough for all businesses; small, medium and large. This is one of the reasons the provincial government delayed the budget to November,” added Calandra.

In reply to a question about why the province was not opening up by region, Calandra explained that it had been discussed in Cabinet, but that they had decided against it. He recalled that when this was done in other parts of North America it caused community spread. “People went to those areas outside of New York for safety.” There has been a lot of concern about people going into cottage country in Ontario, which would put pressure on local hospitals and the supply chain. The message has to be the same for everyone.
Calandra responded to questions about rent relief for non-profit organizations, Covid-19 testing, mandatory masks, what has been learned from such tragedies as Participation House and Markhaven Home for Seniors, Ontario health teams, shortage of personal support workers, wages and immigration.

It was an eventful meeting and exemplary of the kind of cooperation between levels of government that Calandra suggested would renew people’s confidence in the future.

MP for Markham-Stouffville Helena Jazcek will be the guest at the next Zoom meeting with Mayor Scarpitti, city councillors and residents.

Allstate presents the 6th Annual Markham Performing Arts Awards on November 26. The Virtual Awards Ceremony will be an evening