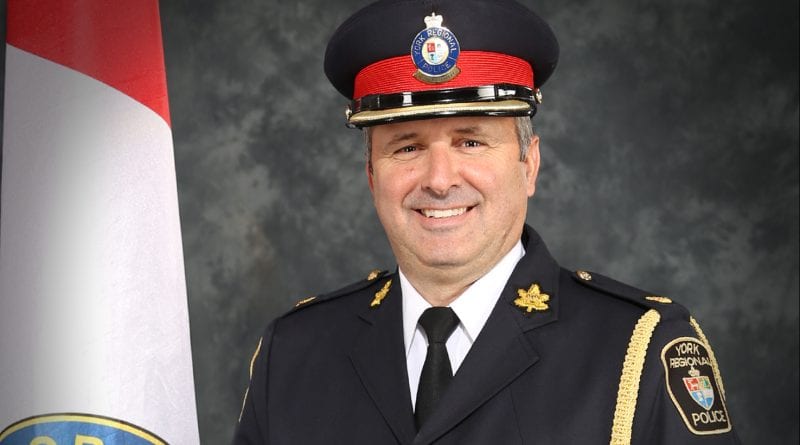 James MacSween has been chosen to fill the role of Chief of Police for York Regional Police, effective May 1, 2020.

“Deputy Chief MacSween has the qualities of modern leadership. He performs at a high level, with
integrity and commitment, and is the strong and supportive leader required to achieve successes
over the next five years,” said Virginia Hackson, Chair of York Regional Police Services Board.

MacSween has 30 years of service with York Regional Police and has proven
leadership abilities across all areas of the organization. He has extensive experience
in administration, operations and strategic initiatives. MacSween has served as the
officer-in-charge of #2 and #4 Districts, Training and Education and Operational Command. As the
Deputy Chief of Police he was assigned to the Support Branch where he led a number of key strategic
initiatives for York Regional Police.

MacSween holds a Bachelor of Applied Arts Degree in Justice Studies from the
University of Guelph. He is also a graduate of the Police Leadership Program at the Rotman
School of Management and the Executive Strategic Management Program at the Senior
Management Institute for Police. He has a proven track record and is known to be a strong team
builder and communicator.

MacSween is a recipient of the Governor General’s Exemplary Service 20-year medal
and is active in the community where he volunteers his time with such organizations as Special
Olympics Ontario. He is currently the Vice-Chair of the Board of Directors for St. John Ambulance
and has previously served as Chair of the Community Services Committee.

“I feel privileged and honoured to have the opportunity to lead a forward-thinking organization that
embraces technology, and is always looking for ways to improve. I want to thank the professional
and highly dedicated women and men of York Regional Police for their ongoing commitment to the
safety of our community, and to the health and well-being of our members. Lastly, I want to thank
the York Regional Police Services Board for having the trust and confidence in choosing me as the
next Chief of Police, and for their ongoing support to our
organization,” said MacSween.

MacSween will succeed Chief Eric Jolliffe who retires on April 30 after 40
years in policing. He spent 10 years as Chief of Police.

Photo: James MacSween to fill the role of Chief of Police for York Regional Police, effective May 1, 2020.