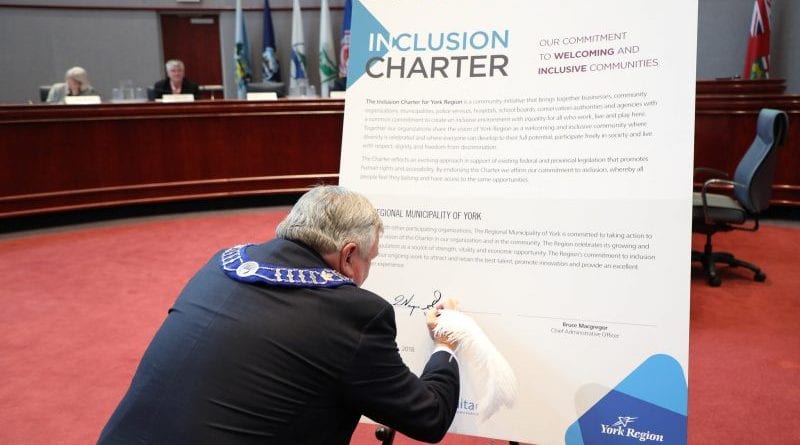 The creation of the Inclusion Charter for York Region that identifies a common commitment to be more welcoming and inclusive is among the reasons why York Region has been named one of Canada’s Best Diversity Employers for 2020.

The Region, home to people who speak more than 120 different languages and come from 230 distinct ethnic origins, was also selected because it supports the employment efforts of new Canadian jobseekers and maintains a Newcomer Strategy that focuses on he economic and social integration of newcomers.

This is the fifth time York Region has received this recognition. “With nearly half of our 1.2 million residents born outside of Canada, we believe our corporation should, and does, reflect the diversity of the communities in which we serve,” says York Region Chairman and CEO Wayne Emmerson.

In 2016, 49 per cent of York residents identified themselves as a visible minority and 46 per cent identified themselves as born outside of Canada. “This most recent acknowledgement speaks to the continued efforts of our 4,500 employees to create and sustain a workplace and community that celebrates all dimensions of diversity,” says York Region Chief Administrative Officer Bruce Macgregor.

Canada’s Best Diversity Employers is administered through the Canada’s Top 100 Employers project. In its 13th year, it celebrates employers across Canada with exceptional workplace diversity and inclusiveness programs in a variety of areas. This includes programs for employees from five groups: women, members of visible minorities, persons with disabilities, Aboriginal Peoples and Lesbian, Gay, Bisexual and Transgendered/Transsexual individuals.

The Region has also been named a Greater Toronto Top Employer and a Top Employer for Young People in Canada for 2020 by Mediacorp Canada.