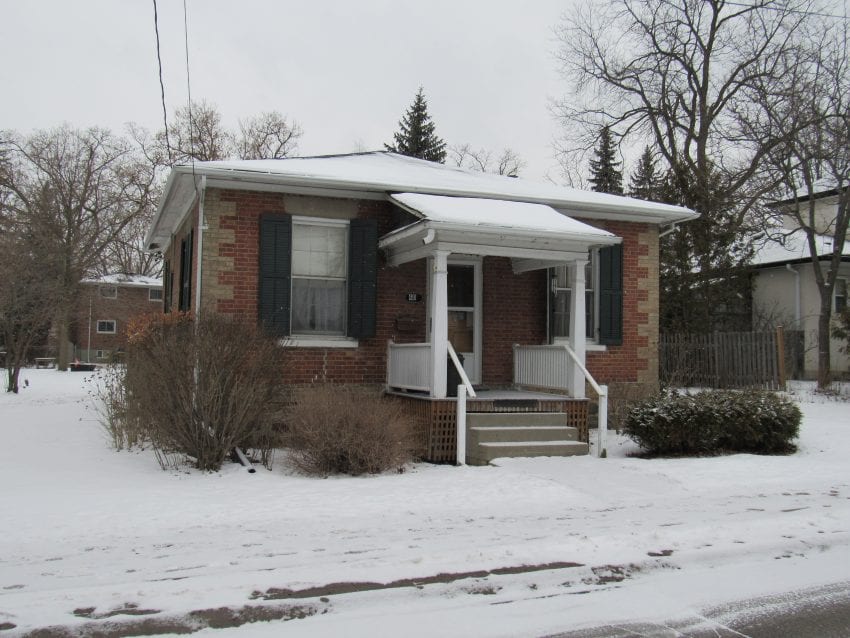 It is said that history is written by the victors. What then of the ordinary people who neither won nor lost, but simply lived extraordinary lives?

The history books pass over some people—mostly those who did not distinguish themselves as political leaders, owners of prominent businesses, or as soldiers or rebels. Every now and then, a file is opened, an historical property researched, and something noteworthy comes to light after years of obscurity.

This is the story of William Leaper, an ordinary man who lived an extraordinary life. Leaper was born in England in 1821. At an early age he was left fatherless, raised by his aunt and uncle in London, not far from Westminster Abbey. When Leaper’s aunt died, he went to work as a butler in an upper class residence. There, he met Mary Pierce, who was employed in the same household. The couple married in 1851, and through the Pierce family connection, Leaper would eventually find himself living on Albert St. in Markham Village.

Leaper answered an ad for a footman at Buckingham Palace during Queen Victoria’s reign. A footman is a liveried servant attending to the door and table. He was hired and assisted of one of Queen Victoria’s ladies-in-waiting. He wore a white satin vest with gold-plated buttons as part of his uniform. Some of the buttons were given to his granddaughters many years later as souvenirs of their grandfather’s time at the palace.

William and Mary decided to leave England to seek a better life in America. In the early 1850s, they arrived in New York City and found a home in Brooklyn. Mary became a cook in the household of a wealthy family, while her husband went to New Orleans to take a temporary but lucrative position as a caregiver to a man suffering from yellow fever. When he returned to New York after three weeks away, Leaper started his next job with a company that sold hair-restoring tonic for bald men. Funnily enough, the owner of the company was “as bald as a dinner plate,” as told in a family history written by Grace (Leaper) Lester, Leaper’s granddaughter.

Mary’s brother, Joseph Pierce, was a shoe-maker who lived in Markham Village. His small frame cottage once stood at 29 Albert St., where a modern house stands today. Life must have been pretty good in Canada West, the pre-confederation name for Ontario, because in the late 1850s the Leapers were convinced to leave the hustle and bustle of New York City for the comparatively quiet life of rural Markham Village.

Leaper found employment at the Speight Wagon Company, Markham’s largest employer and best-known manufacturing company in the 19th century. He was hired as a stationary engineer, the operator of the steam engine that powered the machinery of the wagon works and woodworking shop. This was an important job in a large industrial complex that depended on steam power to keep the saws, planers and other machines humming. In 1858, he bought a vacant lot at 41 Albert St., later building a modest frame house of three or four rooms was built there to house his family. Mary got a job as caretaker for the Methodist Church, to assist with the household income.

The family moved up in the world in 1871 when they bought the house across the street from where they lived. Their new home was a well-built one storey brick cottage originally constructed for Thomas Speight of the Speight Wagon Company in 1856. An indication of the family’s success was the fact that they owned a piano, a costly luxury for a working-class household. William and Mary Leaper had five children ranging from age two to 17 when they bought the former Speight residence.  Their oldest daughter Matilda Jane, born in New York City, was working as a school teacher in Stouffville in 1871.

After living in Markham Village from 1858 to 1882, the Leaper couple decided to uproot themselves once again. They sold their comfortable home at 40 Albert St. and bought a farm at Moore Centre, south of Sarnia, Ontario, following their daughter who had moved there after marrying a gentleman named William Blake. Charles, the youngest son of William and Mary Leaper, lived on the family farm until the early 1960s. He was 92 years of age in 1962 when his daughter Grace wrote down the family history that allowed this fascinating story of Markham’s past to be told, one of many preserved in the archives of the Markham Museum.

Photo caption: The second home of William and Mary Leaper, at 40 Albert Street. William Leaper was the stationary engineer at the Speight Wagon Company.