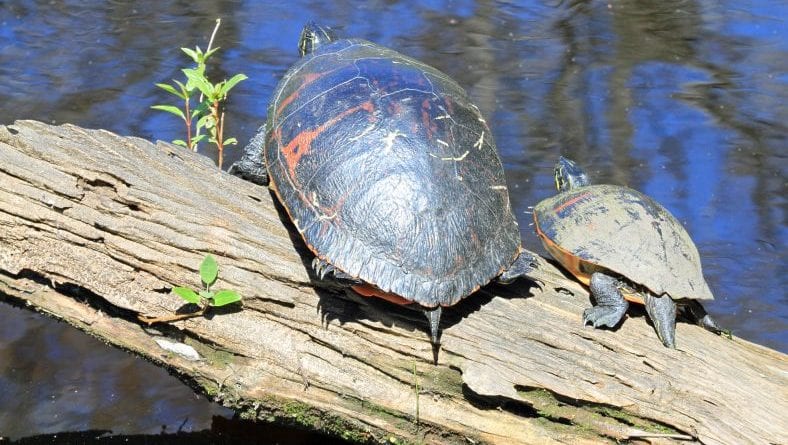 If you look carefully, there is an abundance of wildlife in and around Markham.

Sometimes animals stray into urban areas from the countryside and make themselves at home. Sometimes they have been here all along. Some do well thank you very much.

The rabbits that tear through backyards and parks around Unionville are plentiful and kind of cute. And there is no shortage of bold racoons, skunks and Canada Geese that are all less cute, but very able to adapt to urban rigours. A walk through ravine paths might yield sight of a fleet fox, coyote or deer, and those are a treat to behold. But one scenic, once-plentiful sight you do not see much of is that of turtles basking in the sun on the edges of area ponds.

Turtles basking on a log on the West side of Toogood Pond by the viewing stand was an easy find. Non-native red-eared sliders mixed easily with native painted turtles. Similarly, Milne Park and numerous other ponds brought the same soothing sight.

There are several reasons why turtle numbers are dropping across Ontario. The reproductive capacity is low compared to some animals and the mortality rate of young is quite high due, in part, to natural predators. Many populations have seen severe reduction due to habitat destruction and traffic kill along roads as they migrate across them searching for habitat or mates.

But in Markham, the disappearance is caused by one particular reason according to one local activist and turtle lover. Poaching, says Andrew Fuyarchuk.

For the past five years, Fuyarchuk has made it his mission to prevent the disappearance of the last turtles in Markham. Aided by over-stretched Ministry of Natural Resources (MNR) officials and, sometimes local officials, he has tried to be a vigilant defender of the rather defenceless reptiles. But it has been an uphill fight against perpetrators that will trade a species for a few measly dollars.

With unscrupulous buyers ready to pay to make turtles into soups or pets, the criminally inclined are not easily deterred by good sense, laws or inconvenience. Fuyarchuk has repaired damaged fences, destroyed traps and bait sets only to see his work undone shortly thereafter.

Even confronting poachers directly when he finds them as he has done about a dozen times over the years has not eroded the criminal’s resolve. Although he does note that when the MNR did send an officer a couple of years ago, incidents did slow down suggesting that the perpetrators know what they are doing is wrong.

Although information on legal penalties is not easy to find on government sites, turtles are protected under the Fish and Wildlife Conservation act (1997) which prohibits people from killing, harming or collecting any of Ontario’s native turtle species.

It is also illegal to buy, trade or sell them under the ESA. Penalties for anyone who commits an offence under the act. may include fines of up to $250,000 for individuals and $1 million for corporations and/or up to one year in jail for individuals for a first offence.

But now with the warm weather upon us, Fuyarchuk again fears the poachers are back and erasing turtles from the last places they are seen in the area.

“As far as I can tell, the turtles in most of the lakes and ponds in Markham have been removed over the last 10 to 20 years,” Fuyarchuk says. “There isn’t much of anything left except in Swan Lake. The MNR responded very effectively under the circumstances, but they can’t do it alone and need community cooperation.

“It is also important that people in other cities, towns and villages in Ontario learn about this and step up to stop it.”

That will take political will and resources and your help notes Fuyarchuk. If you see people taking any wildlife, other than in-season fish from our nature preserves, it is illegal and you can file a report with the MNR general report line 1-877-847-7667 or even Crime Stoppers York Region at 1-800-222-TIPS (8477).

You can get more information for species at risk, including turtles, at https://www.ontario.ca/page/species-risk-ontario or https://ontarioturtle.ca.