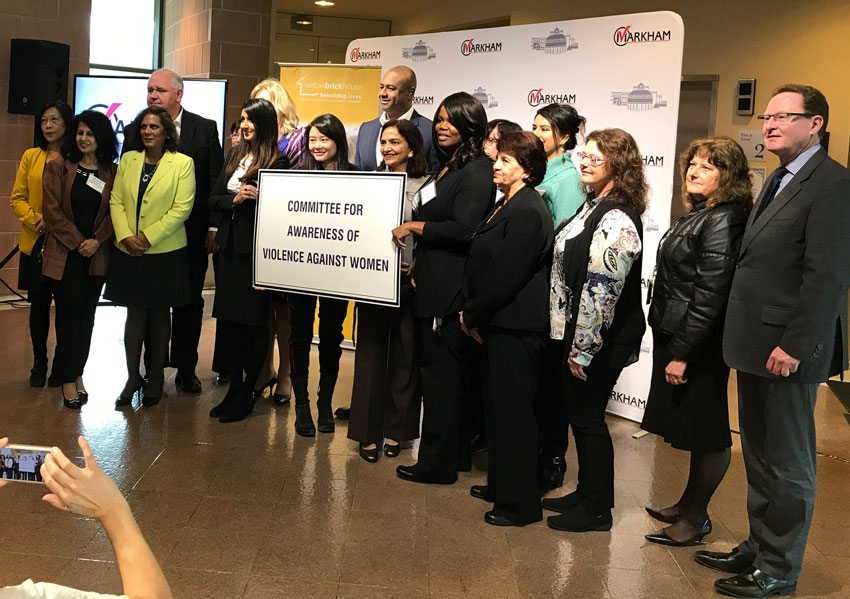 For 39 years, Yellow Brick House has been the largest provider of services to women and children experiencing violence and abuse in York Region. At the event, the mayor was named as the honourary co-chair of Markham’s “Committee for Awareness of Violence Against Women.”

“I don’t think we can rely on any one agency to tackle the issue of domestic violence, we have to work together,” he told the crowd. “Do not be afraid, reach out and get help. It’s a brave step for women, but we are here to support them.”

“Each and every one of us can make a difference,” he added. “I encourage everyone, if you know a perpetrator, encourage them to get help. Have the conversation, even if it’s difficult.”

A startling fact: one in four women experience abuse in York Region. And last year, 280 women and 295 children fleeing violence could not access a shelter bed.

“Domestic violence is not a topic people like to talk about,” said Lorris Herenda, YBH executive director. “It impacts everybody. On any given day, 3,000 women, children find themselves in shelters.”

“Theirs is truly a noble cause,” Scarpitti said. “They offer sanctuary for women and children, victims of domestic violence, and the need is, sadly, great in our community.”

In its commitment to ending violence against women, the City of Markham will be proclaiming Dec. 6 as a National Day of Remembrance and Action on Violence Against Women, marking the anniversary of the 1989 École Polytechnique massacre in Montreal, Quebec. At 9 a.m., “a call for remembrance and action,” will be held at the Markham Civic Centre council chambers. The event is an opportunity for attendees to increase awareness and knowledge in regard to the violence presently suffered by many women in York Region. Admission is free and registration, at eventbrite.ca, is recommended.

There is a story to tell. Invisible no more. Log on to yellowbrickhouse.org for information.

Photo courtesy of the City of Markham