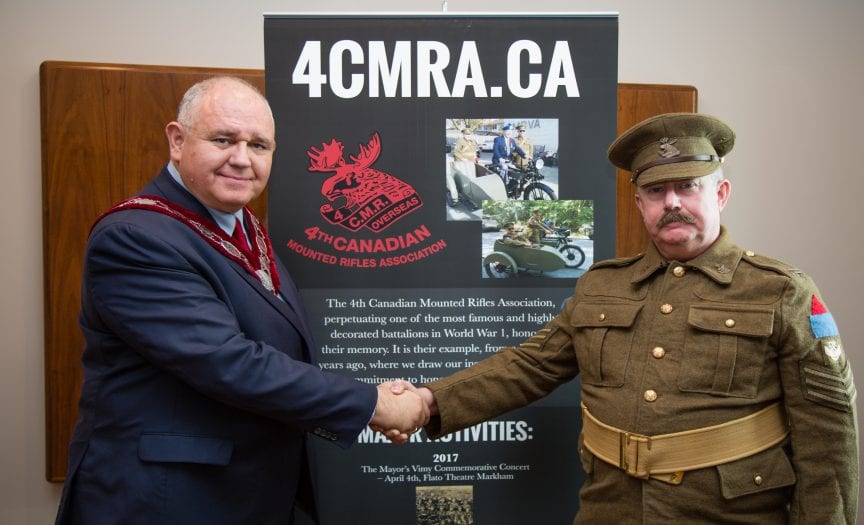 The Vimy Ridge memorial event started with a dream. It has morphed into the much sought after upcoming Mayor’s Commemorative Vimy ‘Trench’ Dinner and Band Concert, which will be held at the Flato Markham Theatre Apr. 4.

The ‘Trench’ dinner will include food made deliciously for this elegant evening, with foods researched that were eaten during those times.

The concert will feature two military bands playing music from that era, interspersed with actors reading Letters from the Front.

Robert Andrew McTaggart, a former officer in the Governor General’s Horse Guards, explains, “A few years ago, I visited Vimy Ridge and La Chaudière Military Cemetery in France, where my great uncle, Fredrick McTaggart, fought and died on April 9, 1917. The hugely moving moment made me feel I had to commemorate his sacrifice and that of all those Canucks from that battle which helped define who we are as Canadians today.”

The 4CMRA also supports Wounded Warriors of Canada (WWC) which was set up to “honour and support Canada’s ill and injured Canadian Armed Forces members, Veterans, First Responders and their families.” Part of the proceeds from the April 4 event will go to WWC.

With the help of many, including the Honorary Chairman, former Ontario Cabinet Minister David Tsubouchi, and the Honorary Historian, Major General Lewis MacKenzie, remembered worldwide for his work in Sarajevo, the 4CMRA has undertaken a variety of commemorative events. See 4CMRA.ca for more details.

The dinner and concert commemorate the 100th anniversary of the Battle of Vimy Ridge.

McTaggart notes, “People from all walks of life will be there to show their gratitude to those who fought at Vimy Ridge. Vimy gave Canada a powerful, positive symbol of who we are as a nation. At the ‘Trench’ Dinner and Concert, that is what will be honoured.”