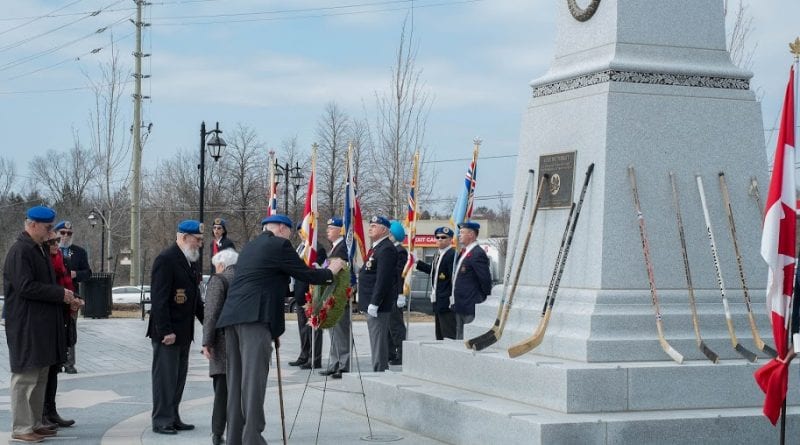 On April 6, a ceremony was held at the Markham Village Veteran’s Square and Cenotaph to commemorate the battle of Vimy Ridge.

The battle lasted from the dawn of April 9 to April 12, 1917. Under the leadership of Lieutenant-General Sir Julian Byng, all four of Canada’s divisions fought together to defeat the German stronghold and key to their defense, Vimy Ridge. John Chalmers, MC for the commemorative event, explained how the battle was the single biggest advance in the First World War. The ceremony also paid tribute to those that lost their lives in the Humbolt Broncos tragedy a year ago to the day.

One of the attendees, Peter Cannon, had been in the Royal Navy for sixteen years. During the Korean War, his ship (destroyer HMS Comus) patrolled the coast and was hit by shore battery. At the ceremony, he recalled that his father and uncle fought in the First World War.

“Dad was in a rifle brigade,” said Cannon. “He was a member of the Green Jackets. After the war, he was part of occupying force in Germany until 1920. He spoke German with the local accent he had acquired in the village Himmelgeist, just outside Dusseldorf.”