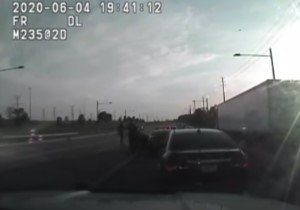 York Regional Police have charged a 23-year-old woman from Vaughan after a concerned citizen called 9-1-1 to report a suspected impaired driver.

On Thursday, June 4 at 7:35 p.m., police received a 9-1-1 call from a concerned citizen who was reporting a suspected impaired driver in the area of Highway 7 East and East Beaver Creek Road. The caller advised that the car was all over the road and nearly struck other vehicles. While police were en route, concerned citizens used their vehicles to block in the suspect after she had stopped in the area of Highway 7 East and Bathurst Street.

When officers arrived they saw that the suspect driver was showing obvious signs of being impaired by drug. She had told one of the concerned citizens that she had taken cannabis gummies and mushrooms prior to driving and cannabis gummies were also found in her vehicle. The driver was placed under arrest and paramedics were called to the scene. The driver was taken to hospital out of concern for her level of intoxication. She was later released from hospital with no injuries and has been charged.

A video of this incident is available for viewing at the following link: https://youtu.be/vOUIGboUSWE

Charged:
A 23-year-old woman from the City of Vaughan has been charged with impaired driving and dangerous operation of a motor vehicle.

In 2019, York Regional Police received 3,500 calls to 9-1-1 reporting suspected impaired drivers as part of the Safe Roads, Your Call program. That was an increase of nearly 18 per cent from the previous year. Many of those calls led to the more than 1,700 impaired-related criminal charges laid. So far in 2020, there have been more than 900 calls to 9-1-1 to report suspected impaired drivers. If you see dangerous driving on the road that could jeopardize the safety of motorists and pedestrians, you are encouraged to call 9-1-1 immediately.

York Regional Police continues to remind residents that the safest amount of alcohol or drugs to consume before you drive is zero.