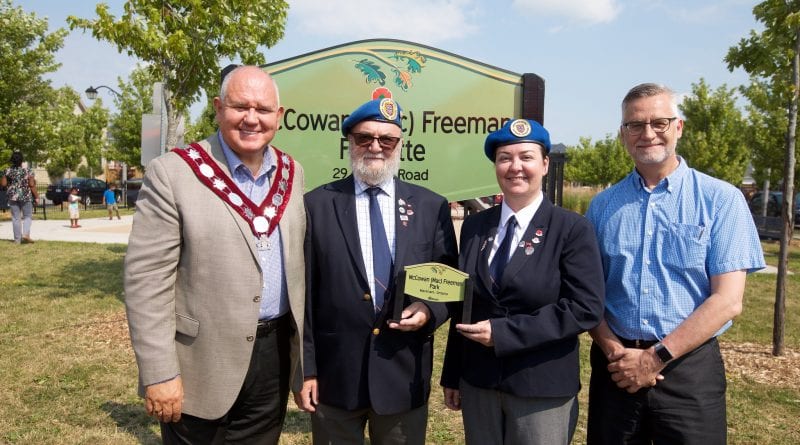 A park named after a Second World War bomb aimer, whose plane was lost in a fierce air battle, was the first of 28 parks that will be recognized this year with a poppy on its sign.

The City of Markham launched its Veteran Park Program at McCowan (Mac) Freeman Park in Cornell on Saturday, July 27th. The park is named after Alexander McCowan Freeman – known to family and friends as ‘Mac.’

“Mac is among the many brave men and women who valiantly fought for our freedom,” Markham Mayor Frank Scarpitti says. “By placing poppies on parks named after veterans, we are continuing to show our deep admiration, respect and gratitude.

“We hope that when people see the poppy, they will reflect on an important chapter in Canadian history and remember our heroes who sacrificed so we would enjoy the many blessings we have today.”

Freeman joined the Royal Armed Forces (RAF) and was a Warrant Officer Second Class who served with 630 RAF Squadron. His fighter bomber was one of 863 that left England for a mission in Stuttgart, Germany and was among several lost in a battle on March 16, 1944. His family were long-time farmers and members of the Markham and Scarborough community, lending their family name to McCowan Avenue.

The park features a pergola with benches, a play structure and shaded trees for picnicking. A newly-planted Tulip Tree – one of the tallest and most interesting native trees to Ontario – was planted as part of Markham’s Trees for Tomorrow Program to mark the event. The goal of the program is to increase and diversify Markham’s urban canopy. The tree’s seeds are favourites for birds, squirrels and other wildlife. 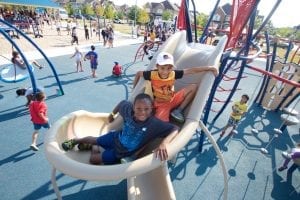