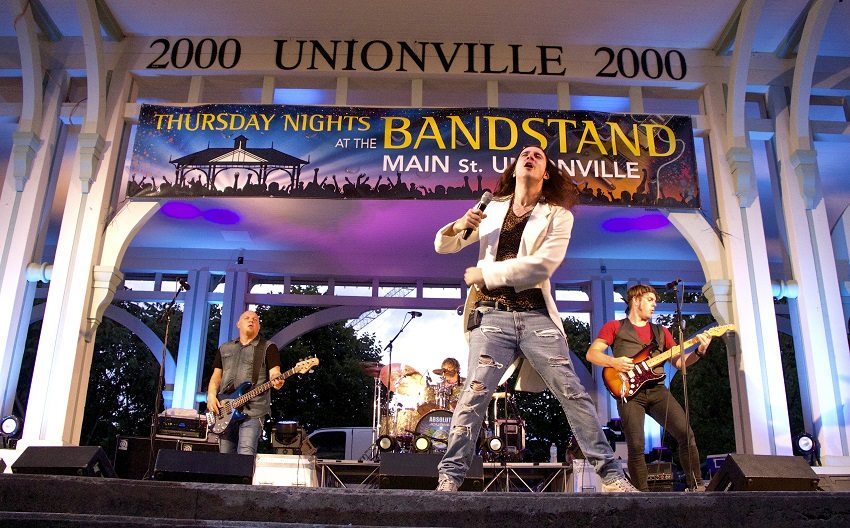 The sun will be out and the sounds abound this summer with the return of Thursday Nights at the Bandstand.

The popular summer series will once again take the stage at the Unionville Main Street Millennium Bandstand for its ninth season starting June 15, bringing talent across the spectrum of genres to the stage each week for a free concert.

From up-and-coming acts to tribute bands of musical greats like the Eagles, the Beatles, and Elton John, this year is expected to stick close to the tried and true format that has kept people coming back for the past decade.

“It ain’t broke, so we’re not going to fix it,” said organizer Bill Dawson, a Unionville resident and concert promoter. “We listen to our audience. We get great feedback from our audience, and we’ve had significant positive reviews in terms of what we’ve put together.”

Beyond the theme, another constant of the events are the cost—there isn’t one. The concerts are free thanks to the many sponsors.

This is one of the most important elements of the series, Dawson said.

“The whole purpose of this is a volunteer group putting on a great live music series for the community,” he said. “From the outset when we started this nine years ago, this was all about giving something to the community that would have (people) gravitate into the village so the village would benefit from it.”

Concerns about weather pushed the opening back further than it usually would be. The series kicks off June 15 and runs until August 31—each show starting at 7:30 pm. Organizers estimate 750 to 1,000 people come out for each show.

Beyond bolstering the profile and attendance of Main Street Unionville, Dawson also said the series plays an important role in bridging cultural divides.

“Our multicultural diverse audience each week speaks volumes that music is a recognizable international language,” Dawson said. “Our audience passionately singing lyrics along with our artists says it all.”

Popular artists from previous years like Hot Rocks and Hotel California, singing the music of the Rolling Stones and the Eagles, respectively, will be returning. The line-up also includes the Latin stylings of Johannes Linstead and Steely Dan’s hits performed by Pretzel Logic.